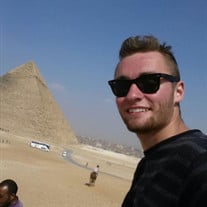 Overland Park, KS – Zachary A. “Zach” Murrell, 27, formerly of Sioux City, IA, passed away Tuesday, February 22, 2022, at his residence in Overland Park, KS. A Memorial Service will be 3:00 pm Friday, March 4, 2022, at Christy-Smith Funeral Homes, Morningside Chapel, 1801 Morningside Ave., with visitation two hours prior. Immediately following the service, the family invites everyone to Western Iowa Tech Community College Entrance 1 for a memorial dedication and celebration of life ceremony. Online condolences may be expressed to the family at www.christysmith.com. Zachary Allyn “Zach” Murrell, the son of Terry and Amy (Langemeier) Murrell was born March 22, 1994, in Louisville, KY. He graduated from Sergeant Bluff-Luton High School in 2012. Zach was a National Merit Scholar, participated in quiz bowl and was on the football and bowling teams. He went on to graduate from Western Iowa Tech Community College in December of 2012, where he was Phi Theta Kappa International Honor Society’s Iowa Regional President. Zach then attended Iowa State University to pursue a Mechanical Engineering degree. He served on the CyRide Board, President’s Leadership Class, and was a member of the Alpha Sigma Phi fraternity. He graduated in December of 2016 and was extremely passionate about Iowa State and ISU Athletics. While in college, Zach studied abroad in Peru and Spain, and made trips to Italy, Germany and Egypt where his passion for travel took root. He loved to immerse himself in other cultures; he especially loved their people, food and currencies. Upon returning to Sioux City, Zach was employed as a Software Developer at Antidote 71. He then moved to Overland Park, Kansas where he worked as a Software Engineer at Rx Savings Solutions. Zach was a maven of technology, movies, books, and games. He was an amazing person with a quick wit, sharp sense of humor and contagious smile which brought color to people’s lives. Zach had a huge heart and was enthusiastic about sharing his loves with others. He cared deeply about people and animals, especially cats. Zach is survived by his parents, Terry and Amy Murrell of Sioux City, IA; his brother, Connor Murrell of Ames, IA, and Connor’s fiancé, Allison Zink; maternal grandparents, Roland and Norma Langemeier of Schuyler, NE; paternal grandparents, Mike and Judy Murrell of Chillicothe, MO; paternal great grandmother Joyce Murrell of Fairmont, NE; and many other relatives and friends. The family has requested that memorials be directed to the Zach Murrell Study Abroad Memorial Scholarship, c/o Theresa Petty, Western Iowa Tech Community College Foundation, 4647 Stone Ave., Sioux City, IA, 51106.

The family of Zachary Allyn Murrell created this Life Tributes page to make it easy to share your memories.

Send flowers to the Murrell family.