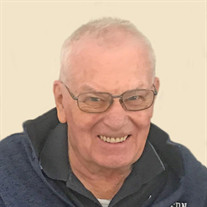 Winfred “Jack” Richard Lambert, age 85, of Sioux City passed away, Tuesday, March 1, 2022 at his residence. Funeral services will be held at 11:00am Tuesday March 8, 2022 from Grace United Methodist Church in Sioux City. Graveside services will be held Tuesday at 3:00pm at the Dow City Cemetery in Dow City, Iowa. Visitation will be held one hour prior to the service on Tuesday at the church. Christy-Smith Morningside Chapel is in charge of arrangements. Jack was born in rural Crawford County, Iowa on June 24, 1936 the son of Winfred and Helen (Grell) Lambert. He attended Dow City Consolidated School and graduated with the class of 1954. He was united in marriage with Audrey Petersen on January 15, 1956 at the Dow City United Methodist Church. A U.S. Army Veteran serving his country from 1958-1960 and with the Army Reserve from 1960-1964. The couple moved to Sioux City on July 23, 1976 and made their home here. Jack worked at Bomgaars managing the Sioux City store and then became a buyer for the company. He then became a District Manager for Coast-To- Coast Hardware for the Iowa, Nebraska, and South Dakota territories. He then worked for Midwest Technology Products for 10 years before retiring. Jack was a member of Grace United Methodist Church where he served as an usher for many years. He enjoyed camping and boating. He cherished the time he could spend with his family and especially enjoyed his visits with his grandchildren and great-grandchildren. Left to hold his memory dear to their hearts and minds are his wife of 66 years, Audrey, of Sioux City, his favorite and only daughter Penny Lewis (husband James) of Sioux City, his 6 grandchildren, 5 great-grandchildren and many nieces and nephews. He is also survived by two brothers: Larry Lambert (wife Debra) of Washington State, and Dennis Lambert (his wife) of Carroll, Iowa, three sisters: Delores Brotherson (husband Howard), of Lake View, Iowa, Eileen Paulson of Carroll, Iowa, and Judy Deiber of Denison, Iowa. He was preceded in death by his parents, his son Scott, and 2 sisters, 3 brother in-laws. In Lieu of flowers, the family wishes that memorials be made to Hospice of Siouxland.

The family of Winfred "Jack" Richard Lambert created this Life Tributes page to make it easy to share your memories.

Send flowers to the Lambert family.