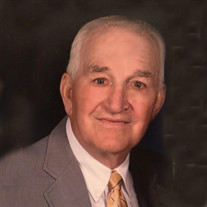 William Jay “Bill” Treinen, 87, passed away on November 20, 2020 surrounded by his loving family. Funeral services will be held on Monday, November 23, at 10:00 a.m. at Holy Cross Parish, Blessed Sacrament Catholic Church with Father David Hemann officiating. A private family burial service will be at Calvary Cemetery in Ponca, Nebraska. Visitation will be held Sunday, November 22 from 4:00 – 8:00 p.m. at Christy-Smith Funeral Homes, Larkin Chapel, 2320 Outer Drive North, with a rosary and a prayer service at 6:30 p.m.. Masks and social distancing are required. Bill was born December 19, 1932 in Le Mars, Iowa, the son of Leonard and Sylvia (Kramer) Treinen. In 1951 he graduated from Le Mars Central High School where he was active in sports, drama, and music. He attended Westmar College before serving in the U.S. Army from 1953-1955. Most of his Army duty was spent in Alaska during the Korean conflict. On July 9, 1960, Bill married Jo Ellen Knerl at St. Joseph Church in Ponce, Nebraska. The couple was blessed with seven children. He began employment with IPS (now Mid-American Energy) in 1955. Before retiring in 1989, he worked in Le Mars and Storm Lake, Iowa; Canton and Yankton, South Dakota; and Sioux City. He began as a draftsman and became a gas specialist and an area manager. In each of these communities Bill was active in his parish and in civic responsibilities. Throughout the years he has been a member of the Knights of Columbus, Chamber of Commerce, Rotary International, Marriage Encounter, and St. Serra of Siouxland. He served on the Board of Trustees for Mt. Marty College (now University). In 1965 he was named Young Republican of the Year for the State of South Dakota. When able, he was a faithful volunteer at his parish and at Queen of Peace, Trinity Heights. Bill enjoyed camping, golfing, woodworking, and traveling. He loved attending his children’s many school activities. Bill is survived by Jo Ellen, his wife of 60 years; his seven children, Amy (Kevin) Ely of Seattle, WA, Paul (Julie) Treinen of Ortonville, MN, Betsy Treinen of St. Paul, MN, Katy (Nick) Karrer of Sioux City, IA, Dan (Stacie) of Minneapolis, MN, Mike (Lola) Treinen of Waterloo, IA, and Matthew (Jenn) Treinen of Moscow, Russia. Also remembering him with love are his 17 grandchildren; 3 great-grandchildren; two sisters, Dorothy Langel of Le Mars and Charlotte (Terry) Townsend of Newton, IA; one brother-in-law, Phil Knerl of Ponca, NE; and many nieces and nephews. He was preceded in death by his parents, Leonard and Sylvia; his brother and wife, Mark and Joyce Treinen; his sister and husband, Marilyn and John Forman; his brother-in-law, Ray Langel; his father and mother in-law, Orin and Bonnie Knerl; brothers and sisters-in-law, Jack and Betty Knerl, Jerry and Margaret Knerl, Bob and Norma Knerl, Tom and Mary Ann Wente. The family thanks Holy Spirit Retirement Home and Hospice of Siouxland for their loving care of Bill. In lieu of flowers, memorials in Bill’s name may be directed to Trinity Heights (PO Box 1707, Sioux City, IA 51102) or to The Abbey of Hills (46561 147th St., Marvin, SD 57251).

The family of William J. Treinen created this Life Tributes page to make it easy to share your memories.

Send flowers to the Treinen family.