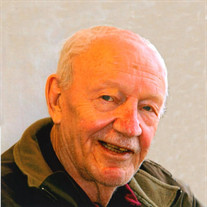 William “Bill” H. Thompson, 92 of Sioux City, Iowa boarded a train for his last ride home on Sunday, March 15, 2020, as his wife and family looked on. As a husband, father and grandfather, Bill deserves a beautiful tribute so a Celebration of Life service will be held at a later date due to this unknown time with the Covid-19 pandemic. Online condolences may be made to the family at www.christysmith.com Bill was born October 24, 1927 in Sioux City, Iowa to Frank & Alma (Bates) Thompson. He grew up in Sioux City and attended Central High School. He entered the U.S. Air Force and served from 1945 - 1947 and was honorably discharged as a corporal. Bill married Mary K. Meacham July 14, 1951 at Cathedral of the Epiphany Catholic Church in Sioux City. The couple had three children: Frank, Cheryl and Scott. William worked as a conductor for the Burlington Northern Railroad retiring in 1980. In retirement he delivered teddy bears and drove a cab for Siouxland Taxi. He was a member of St. Joseph Catholic Church. His hobbies included going on country drives, watching and attending dog and horse races, visiting with people and spending time with his family. Surviving are his wife Mary K; 2 sons, Frank (Libbi) Thompson of Sergeant Bluff, IA and Scott (Teri) Thompson of Sioux City, IA; daughter, Cheryl (Charlie) Ball of Sioux City, IA; 8 grandchildren; 14 great grandchildren; sister, Marilyn J. Adolf and her friend Don of Sacramento, CA,; 3 sisters in-law, Sally Thompson, Judy Thompson and Joanne Thompson all of Sacramento, CA; along with several nieces and nephews. He was preceded in death by his parents and 4 brothers, Frank, Richard, David and Donald. Memorial contributions may be sent to Hospice of Siouxland 309 Cook St. Sioux City, IA 51103.

William &#8220;Bill&#8221; H. Thompson, 92 of Sioux City, Iowa boarded a train for his last ride home on Sunday, March 15, 2020, as his wife and family looked on. As a husband, father and grandfather, Bill deserves a beautiful tribute... View Obituary & Service Information

The family of William H. Thompson created this Life Tributes page to make it easy to share your memories.

Send flowers to the Thompson family.