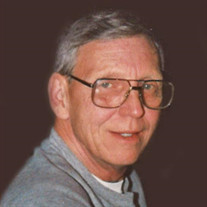 William D. Riley, age 85, of Sioux City died Sunday January 13, 2019 at his residence A Celebration of Life for William will be held at Bob Roe’s Point After on Thursday, January 17 from 1:00 - 3:00 pm. Morningside Chapel Christy Smith Funeral Homes is assisting the family. William was born in Sioux City, Iowa on October 31, 1933, the son of William C. and Tess (Field) Riley. He attended Sioux City Community Schools and graduated from East High School with the class of 1952. William served his country as a member of the United States Air Force following high school from 1952-1956. Following his discharge, he attended Iowa State University for one year, then transferred to Morningside College where he graduated with his Bachelor’s Degree. He then began a 30 year career with the Social Security Administration from which he retired in 1987. He was united in marriage with Nancy L. Ruedy on February 3, 1978 in Dakota City, Nebraska. Bill loved to play golf, go fishing, watch westerns on television, watch horse racing, NASCAR, and visit with all of his friends at the Point After. He was a loyal fan of Iowa State University athletics. Bill is survived by his wife Nancy of Sioux City, his son William and his wife Beth of Hinton, and his two grandchildren Daniel and Desmon Riley. He is also survived by his sisters JoAnn DeMers of Sioux City, and Mary Kay Brown of Sioux City, as well as sisters-in-law Janice Bolte, Barbara Crosgrove and her husband Jim, and many nieces, nephews and friends. He was preceded in death by his parents, his in laws Allan and Lucille Ruedy, three brother-in-laws Arvid Brown, Raymond DeMers, and Dean Bolte. The family requests in lieu of flowers that memorials be made in Bill’s name to Hospice of Siouxland or the Siouxland Humane Society.

William D. Riley, age 85, of Sioux City died Sunday January 13, 2019 at his residence A Celebration of Life for William will be held at Bob Roe&#8217;s Point After on Thursday, January 17 from 1:00 - 3:00 pm. Morningside Chapel Christy... View Obituary & Service Information

The family of William D. Riley created this Life Tributes page to make it easy to share your memories.

Send flowers to the Riley family.