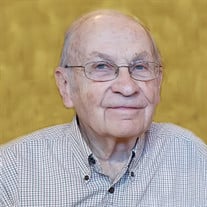 William Paul Jacobsen, age 92, 0f Sioux City died Friday July 26, 2019 at a local care facility. Funeral services will be held at 10:00 a.m. Thursday August 1, 2019 at Morningside Lutheran Church with Pastor Tom Lo Van officiating with burial following in Memorial Park Cemetery. Visitation will be held on Wednesday from 5:30 p.m. to 7:30 p.m. with prayer service at 7:00 p.m. at Morningside Chapel Christy Smith Funeral Homes. Bill was born in Sioux City, Iowa on December 7, 1926 the son of Harry and Louise (Clemens) Jacobsen. He graduated from East High School in 1945. He joined the Army Airforce in 1945. He attended Morningside College for one year in pre-engineering. He married his wife Berline, January 20, 1957. He went to work for Chris Hansen Construction in 1947 as a bricklayer’s apprentice. He joined the office staff in 1966 as an Estimator-Project Manager. He later became secretary/treasurer of Chris Hansen Construction Co. and McHan Construction Inc. He was a past president and board member of the Sioux City Construction League. He also was a past president of Sioux City Master Builders. Bill was a past Commander of Morningside Post American Legion. He is a 50+ year member of Morningside Masonic Lodge. He was a member of Sioux City Consistory and Abu-Bekr Shrine where he sang in the Shrine Chanters. Bill was a member of Morningside Lutheran Church and sang in church choirs for 46 years. Hobbies include woodworking, music, and cars. Bill enjoyed the time spent at their lake home in Okoboji. Bill is survived by his daughters: Claudia Gieske-Hansen (Craig) and Julee Mertz (Mark), his grandchildren: Brad Gieske (Heather), Mark Gieske (Mandy), Chris Mertz, and Erin Kastner (Drew). He is also survived by his great-grandchildren: Eric, Katie, Ella, Gracie, and Taden, along with 14 nieces and nephews. Bill was preceded in death by his parents and his wife Berline; and a brother: Jack Jacobsen. In Lieu of flowers memorials can be directed to Shriners Children Hospital and Morningside Lutheran Church Music Ministry.

The family of William Paul "Bill" Jacobsen created this Life Tributes page to make it easy to share your memories.

Send flowers to the Jacobsen family.