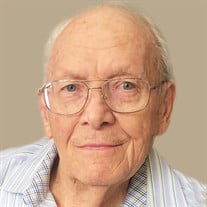 ** UPDATE** Services have now been scheduled William Robert “Bill” Hedlund, 93, passed away unexpectedly Wednesday, November 24, 2021, in Champlin, MN. A memorial service will be 11:00 a.m., Friday, April 22, 2021, at Christy-Smith Funeral Homes, Morningside Chapel, 1801 Morningside Ave., Sioux City, IA. A visitation will be one hour prior. Private interment will be 1:00 pm that same day in Memorial Park Cemetery. Online condolences may be expressed to the family at www.christysmith.com. Bill was born February 11, 1928, in Sioux City to parents, Reuben Hedlund and Alletha Ingebrigsten-Hedlund. He graduated from Central High School in 1946 and went on to graduate from the Sioux City School of Business. Bill worked as a manager at Knapp & Spencer where he met his loving wife of 64 years, Beverly Earith-Hedlund. They married in 1952 at Trinity Lutheran Church. Bill went on to work as a supply chain driver and warehouse manager for Red Star Yeast/Universal Foods for the next 45 years until he retired. They moved with their six children to Minneapolis in 1962. Bill is survived by five children, Connie Lobeck, Steve (Cheryl) Hedlund, Linda (Bill) Williams, Bruce (Darlene) Hedlund, Roger (Michelle) Hedlund; many grandchildren and great-grandchildren; a sister-in-law, Marvis Hendrickson; a cousin, Brent Hedlund; and many nieces and nephews. He was preceded in death by his parents, Reuben and Alletha; wife, Beverly; son, Dennis; and sisters, Jean Skaff and Carolyn Geeron.

The family of William Robert "Bill" Hedlund created this Life Tributes page to make it easy to share your memories.

** UPDATE** Services have now been scheduled

Send flowers to the Hedlund family.