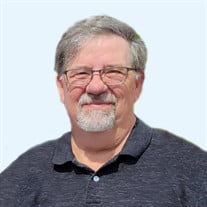 Wayne E. Trudeau, 66, passed away resting peacefully Saturday, August 28, 2021, at his residence in Sioux City, IA. A Celebration of Life will be held 5:00 pm to 8:00 pm Friday September 3, 2021, at Siouxland Center for Active Generations, 313 Cook St, Sioux City, IA. Wayne was an avid sports fan, always wearing Oklahoma Sooners or Green Bay Packer gear. Feel free to come sporting gear of your favorite team or his. Online condolences may be expressed to the family at www.christysmith.com. Wayne Trudeau was born January 13, 1955, in Sioux City, IA to Robert and Gloria (Jean) Trudeau. He was raised in Jefferson, SD and graduated from Jefferson High School in 1973. He attended Trade School at Western Iowa Tech where he became a certified Welder. He then began his 36 years of employment at Load King Trailers in Elk Point, SD. On April 6, 1991, he was united in marriage with Lesa Munson in Sioux City, IA. They resided in North Sioux City, SD for many years before moving to Hospers, IA for a brief time and then moving to Sioux City, IA where they were currently living. Wayne enjoyed camping and fishing with his family and friends. He shared a love of sports with his children including golf outings and watching football with all of them. Wayne also enjoyed coaching his own kids and officiating games in the community. Those who knew Wayne recall that he loved telling stories especially about his kids and grandkids. He was loved by all that knew him and was willing to help anyone that asked. Grateful for having shared his life are his wife, Lesa; children, Robert (Chelsey) of Sioux Falls, SD, Ashley (Jerry), Kory, Kasey (Candace) of Sioux City, IA, Kyle (Emily) of North Liberty, IA, Hunter and Owen of Sioux City, IA; grandchildren, Payton, Kaleb, Kaelynn, Zoey, Avery, Lakin and Lennix; brother, Tom of Yankton, SD; sister, Carol Trudeau of Sioux City, IA; his in-laws, Marlene (Ron) Ransom, Steve Munson, Steven Sorenson, and Patti (Dan) Marsh. He was preceded in death by his parents; one son, James “JP” Trudeau; brothers-in-law, Jerry and James “Jimmy” Munson; and a sister-in-law, Carol Sorenson. Floral Tributes and gifts for the family can be delivered to Siouxland Center for Active Generations, 313 Cook St.

The family of Wayne Earl Trudeau created this Life Tributes page to make it easy to share your memories.

Send flowers to the Trudeau family.