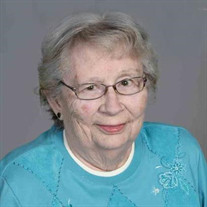 Wanda M. Wiemann, 84, of Sioux City, passed away on Thursday, January 10, 2019 at Mercy Hospital surrounded by her family. Service will be at the Grace United Methodist Church, Morningside Ave., Sioux City, Iowa on Wednesday, January 16, 2019 at 10:00 a.m. Burial will be at Graceland Cemetery following the service. Visitation with the family at Christy-Smith Funeral Homes, Morningside Chapel, will be Tuesday, 5:00 – 8:00 p.m. Online memorial condolences may be sent to Christy-Smith Funeral Homes. Wanda was born on May 6, 1934 to Jim and Lazeta Jensen at Exira, Iowa along with two brothers, Gordon, Charlie and a sister, Christy. Wanda grew up in Exira and graduated from the Exira High School in 1952. She continued her education at Rockford, Ill. attending a business school. When she graduated from the business school, she was then employed with the utility company (IPS) now MidAmerican, at Audubon, Iowa. She met Ted Wiemann, who also worked at IPS as a lineman. They were married at Exira, Iowa on Aug. 15, 1955. They lived in Audubon for five years where their two sons Mark and Curtis were born. In 1960 they moved to Elk Horn, Iowa and lived there for 8 years. While in Elk Horn a baby daughter, Amy Jo was adopted in 1968. The following year they moved to Canton, SD. They lived there for 2 ½ years. Their next move was to Cherokee, Iowa. Wanda was a homemaker and worked at a Hobby Shop on Main Street for several years. Cherokee was home for 10 years and then they moved to Sioux City, IA. Wanda worked at a Hobby Shop on Pierce Street and then she worked at a dress & gift shop in the Southern Hills Mall. When her husband Ted retired, she also retired. Wanda was an active member in the church through-out the communities they lived in. She is a member of the Grace United Methodist Church in Sioux City and attended regularly the Saturday night service as well as being active in the Mary Circle. Wanda had many hobbies and crafts while the children were growing up and continued them as long as she could. The greatest love was feeding the birds, squirrels and raccoons on the back deck. She enjoyed a good card game, gaming at the casinos and a meal out with friends. One of her greatest joys was attending to the special needs of the children or grandchildren. She was always willing to lend a helping hand. Wanda loved to read and always had a book in her hand. Wanda is survived by her husband Ted and two sons; Mark and wife Joan of Algona, Iowa, Curtis of Sioux City, Iowa, daughter Amy Jo and husband Billy Harper of Sioux City, Iowa; a sister Christy and husband John Petersen of Janesville, Wis. Their grandchildren; John of Algona, Iowa and Jamie Bauer of Sioux Falls, SD., Crystal, Tina and Thimery of Sioux City and several great grandchildren. Wanda was preceded in death by her parents Jim and Lazeta Jensen of Elk Horn, Iowa and two brothers Gordon & Charlie in Minnesota.

The family of Wanda Mae Wiemann created this Life Tributes page to make it easy to share your memories.

Send flowers to the Wiemann family.