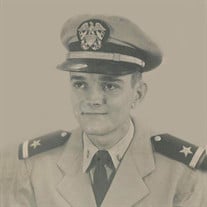 Walter G. Beckwith, 87, of Sioux City, died on January 25, 2021 at a Sioux City hospital. His daughter, Penny, stayed by his bedside for nearly a month prior to his death. A memorial service to honor Walter’s wonderful life will be held at St. Mark Lutheran Church, 5200 Glenn Avenue, on March 13, 2021 at 11:00 a.m. Memorial Gifts may be made to St. Mark Lutheran Church, the Cherokee Symphony, or the Sioux City Renaissance Recorder Ensemble. Walter was born on November 12, 1933 in Laramie, Wyoming, to Radcliffe and Marie C. Beckwith. He grew up in Wyoming. When he was 16, he moved to Roswell, New Mexico, where he graduated from high school. Walter attended the University of Minnesota in Minneapolis on a Navy ROTC scholarship, and graduated with a B.S. degree in mechanical engineering. Before his tour of duty with the Navy, Walter married Yvonne Beckwith in Bismarck, North Dakota. To this union were born 3 children, Lee, Penny, and Grant. Walter worked for FMC, IBP, and Tyson as a mechanical engineer well into his retirement years. Walter was blessed with a great sense of humor. Walter was a member of the First Congregational Church in Sioux City for 10 years, where he sang in the choir and helped to repair portions of the physical plant of that church. Walter then became a member of St. Mark Lutheran Church, where he played flute and sang in the choir. Walter played flute for many years in the Charleston, West Virginia, symphony orchestra. He also played in the Cherokee Symphony, the Siouxland All-America Band, and the Sioux City Renaissance Recorder Ensemble. Surviving him is his wife, Yvonne of Sioux City; his son, Lee Beckwith of Rolla, MO; his daughter, Penny (Tim) Stewart of Concord, NC and their son, George Stewart of Charlotte, NC; Walter’s son, Grant Beckwith of Sioux City; and Walter’s nieces and nephews and their children and grandchildren. Walter was preceded in death by his parents; his sister, Beatrice Carlson and her husband, Ron Carlson; and his niece, Sidney Carlson.

Walter G. Beckwith, 87, of Sioux City, died on January 25, 2021 at a Sioux City hospital. His daughter, Penny, stayed by his bedside for nearly a month prior to his death. A memorial service to honor Walter&#8217;s wonderful life... View Obituary & Service Information

The family of Walter G. Beckwith created this Life Tributes page to make it easy to share your memories.

Send flowers to the Beckwith family.