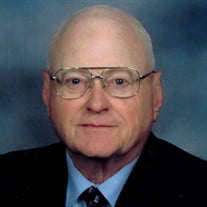 Walter J. Balmer, Jr. 83 of Sioux City, Iowa died on Thursday, February 11, 2021, at Unity Point Health St. Luke’s in Sioux City, Iowa. There will be a private family visitation from 2:00 PM to 4:00 PM on Tuesday, February 16, 2021, at Christy-Smith Morningside Chapel, 1801 Morningside Ave., Sioux City, Iowa. Online condolences may be made to the family at www.christysmith.com. Walter was born September 22, 1937 in Fargo, North Dakota, to Walter "Jack" and Mildred Balmer Sr. He grew up in Fargo and graduated from Fargo High School. He went on to attend North Dakota State University and George William University. He earned his Master’s in Education from University of South Dakota in Vermillion, SD. He married Charlene Mattson in Moorhead, MN on Nov 11, 1960. To this union four children were born Craig, Terri Cindy, and Laurie. Walter worked as the Physical Director for the Fargo YMCA and the Sioux City YMCA before becoming a teacher for the Sioux City Public School System. He was a member of Morningside Lutheran Church. Surviving is his wife, Charlene of Sioux City; son, Craig (Veronica) Balmer of Orlando, FL and their children, Madison and Jack; daughter, Terri Balmer of Carmel, NY; daughter, Laurie (Jeff) Horner and their children, Ean and his wife Jammie (their son Myles) and Abbie of Sioux City, IA; son-in-law, Ryan Puttman and his children, Maxx and Shay of Dakota Dunes, SD; niece, Deborah (Jay) Hoekstra and their son, Mark of Apple Valley, MN. He was preceded in death by his parents; daughter, Cindy Puttman; and a sister and her husband, Lucille (Bill) Murray

The family of Walter John Balmer Jr created this Life Tributes page to make it easy to share your memories.

Send flowers to the Balmer family.