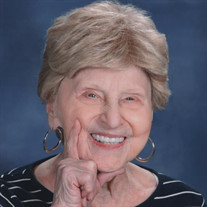 Virginia M. Haggblade, 91, formerly of South Sioux City, NE and Sioux City, IA, passed away Wednesday, May 22, 2019 in Phoenix, AZ following a short illness. A funeral service will be held 11:00 am Saturday, June 22, 2019, at Christy-Smith Funeral Homes, 1801 Morningside Ave., Sioux City, with visitation from 10:00-11:00 am. Burial will follow at Memorial Park Cemetery in Sioux City. Online condolences may be directed to www.christysmith.com. Virginia was born January 7, 1928 near Kimball, South Dakota to Minnie and Bert Pipal. She moved to Sioux City upon graduating from high school, completed business courses and began her career. On November 25, 1961 she married Bob Haggblade of Bronson, IA, and the couple made their home in South Sioux City, NE. They enjoyed travel, were keen supporters of the arts, and were members of the First Presbyterian Church for over 40 years. In 1971 Virginia joined the Trust Department of Security National Bank, where she worked until her retirement in 1999. She relocated to Arizona that same year following the death of her husband, and in the twenty years she lived there, developed a diverse range of friends from all age groups and interests. She had a love of life and independent spirit, and will be deeply missed by all who knew her. Virginia is survived by her daughter, Nancy Davidson; son-in-law Kent; and grandchildren Audrey, Nathan and Miles of Wilmette, IL; her brother, Bert Pipal and sister-in-law Marsha of Seal Beach, CA; and many loving nieces and nephews. She was preceded in death by her parents; husband, Bob; and sisters, Dolores Lloyd and LeMoine Schubert. The family wishes to express their gratitude to her dear friends in AZ, and Hospice of the Valley, to which donations can be made in Virginia’s honor at hov.org/donate/donate-now/.

The family of Virigina M Haggblade created this Life Tributes page to make it easy to share your memories.

Send flowers to the Haggblade family.