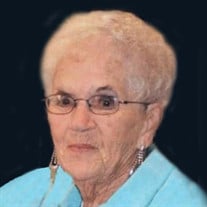 Virginia M. Lewis, 90, of Bronson, died Saturday, November 28, 2020, at Lawton Senior Living in Lawton, IA. A funeral service will be 10:30 am Monday, December 7, 2020, at Christy-Smith Funeral Homes, Morningside Chapel, 1801 Morningside Ave., with visitation one hour prior. Online condolences can be sent to the family at www.christysmith.com. Virginia Marie Cox, the daughter of Ernest and Mabel (Beckman) Cox was born May 23, 1930, in Rolfe, IA. The family moved to Sioux City when she was ten, and Virginia attended school in Sioux City and later Bronson, IA. On Dec. 28, 1947, Virginia was united in marriage with Loren F. Lewis in Sioux City. She was a cook at the Bronson school and also at Countryside Nursing Home. Later, Virginia drove school bus for 36 years, retiring at the age of 72. The years on the school bus were her happiest, and she would yodel every year for the kids. The couple travelled in their camper to McAllen, TX every winter for 13 years. There Virginia entertained visitors in three different parks with her yodeling and singing. Loren died December 12, 2017. Virginia is survived by three children, Linda (Gene) Kollbaum of Bronson, Larry (Sheryl) Lewis of Sioux City, and Patricia (Buddy) Gordon of Sioux City; six grandchildren; 11 great-grandchildren; a brother, Tom Cox of Spokane, WA; and many other relatives and friends. She was preceded in death by her parents, Ernie and Mabel; her in-laws, Ross and Ethel Lewis; her husband, Loren; a sister, Vivian Smith; and brothers, Virgil, Dick, Donald, and Wilbur.

The family of Virginia Marie Lewis created this Life Tributes page to make it easy to share your memories.

Send flowers to the Lewis family.