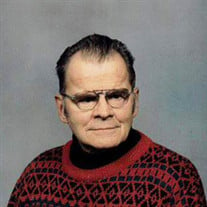 Victor Joseph Greene, 91, passed away peacefully Tuesday, October 26, 2021. Please join us in celebrating his life Tuesday, November 2, 2021 at Riverside United Methodist Church with viewing from 9:00 a.m. to 10:00 a.m.; Funeral at 10:30 a.m. followed with a luncheon at the church. Grave side services will be held at the Memorial Park Cemetery after the luncheon. In recognition of his favorite team, please join us in wearing Hawkeye/casual attire. He was born December 23, 1929, in Sioux City, Iowa, to the parents of Harold Donald Greene and Anna Schoenfelder. He married the love of his life, Charlotte Lucile Larson, on February 14, 1958 at Riverside United Methodist Church. The couple made their home in Riverside where they raised their three children. After 48 years of marriage, his love, Charlotte, passed away on May 6, 2006 at the age of 74. Victor served in the US Army during the Korean War. He worked as a service mechanic for the Milwaukee Railroad for 20 years. He also worked for the Sioux City Foundry and retired after 21 years. He enjoyed working on cars for friends and family, loved the Iowa Hawkeyes, and remained active in his church. He is survived by one brother, Robert (Linda) Greene of Hinton, IA; two sisters-in-law, Karen Greene of Sioux City, IA and Linda Dexter of Clear Lake, SD; two sons, Chuck (SherryLynn) of Falcon, CO and Jon (Lori) of Sioux City, IA; and one daughter, Vicki (Keith) Harrison; four grandchildren, Amber (Mike) Greene, Daniel (Miranda) Harrison, MaKayla (Antone) Lopez, McKenzie Harrison; step-grandchild, Landon Clay; and seven great-grandchildren. Victor was preceded in death by his beloved wife; parents; and three brothers.

The family of Victor Joseph Greene created this Life Tributes page to make it easy to share your memories.

Send flowers to the Greene family.