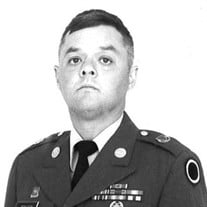 Vernon R. Jensen, age 68, of Sloan, IA, passed on Tuesday, February 1, 2022, surrounded by his family. Visitation will be 5:00-7:00 p.m. Friday, February 4, 2022, at Community Church of Christ in Sloan. Funeral service will be 1:00 p.m. Saturday, February 5, 2022, at the church. Burial will be at the Sloan City Cemetery. Arrangements are with Christy-Smith Funeral Homes, Morningside Chapel. Vernon Ray Jensen, the son of Carroll and Bernice (Schuster) Jensen was born February 15, 1953, in Onawa, IA. He grew up in Sloan and graduated from Westwood High School. Following graduation, he joined the United States Army, where he served for 22 years. He retired from the United State Army, Rank Staff Sergeant serving as a Tank Commander. Vernon worked various jobs around the Sloan area, he attained his Water Operator Certification as well. He retired at the age of 62. He was a member of the Community Church of Christ of Sloan and the American Legion Smith–Rhodes Post 295. He was a sports fan and enjoyed watching the Iowa Hawkeyes and Chicago Bears. Vernon is survived by his sisters, Paulette Herrera, Denise Jensen; daughter, Shannon (Ken) Leighty; son, David (Beth) Jensen; 6 grandchildren; 2 great grandchildren; 2 nephews; and 3 nieces. He is preceded in death by his parents; brother, Darren Jensen; sister, Pam Jensen.

The family of Vernon Ray Jensen created this Life Tributes page to make it easy to share your memories.