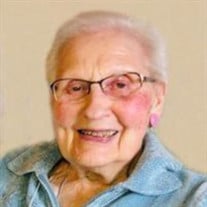 Centenarian Velma Luhr passed away at Sunrise Retirement Center on April 13, 2020. She was born at home on the family farm near Wakefield, Nebraska on July 24th, 1919, the eighth of eleven children of Francis J. Kimbell and Gertrude M. (FitzSimmons) Kimbell. Educated in rural schools, she took normal training in high school, graduating in 1937. She was the first homecoming queen for Allen High School in Allen, Nebraska. A couple of summers spent at Wayne State Teachers College qualified her to teach the lower grades in country schools. While teaching at Oakdale School between Waterbury and Allen, Nebraska, an older brother of several of her students noticed her and began courting. Velma married Earl Luhr on Sept. 1, 1940. They lived in Sioux City and Velma began her life as a homemaker. Due to the state and federal guidance on public gatherings as a result of the COVID-19 pandemic, a memorial service will be held at a later date. Velma tackled the usual homemaking challenges—canning, upholstering, gardening, baking. She excelled at sewing, making most of the clothes her daughters wore and many of her own. An active member of St. James United Methodist Church, she taught Sunday School for 37 years and held numerous offices in United Methodist Women. She served a term as president of Church Women United for Sioux City. Another of her favorite organizations was Girl Scouts. She was a troop leader for 11 years. When her troop graduated, she served as chairperson of the Camping Committee. She was awarded the Thank Award, the highest honor given to volunteers by Girl Scouts of the USA. Always wanting to be busy and helping, in more recent years she created about 80 pillowcase dresses for little girls in Africa, sewed bags for school kits for Church World Service, made baby bonnets from handkerchiefs for newborns at St. Luke’s Hospital, and other projects. Velma is survived by daughters Jan (Gordon) Watson of Spencer and Julie of Sioux City, two grandchildren, Jonathan (Laural) Watson of Spencer and Jennifer Watson of New York City, and two grandsons, Grant and Cole Watson, a sister Alice Holcomb of La Mesa, California, sisters-in-law Norma Kimbell of Sioux City, Lucile Luhr of Sioux City, and Gena Puls of Wayne, and numerous nieces and nephews. Preceding her in death were her husband of nearly 71 years, Earl; her parents, brothers Berton, Merle, Howard, Dale, Virgil, and Earl; and sisters Grace Longe, Fern Isom, and Faith Ruddell, and a nephew Jerry Kimbell.

Centenarian Velma Luhr passed away at Sunrise Retirement Center on April 13, 2020. She was born at home on the family farm near Wakefield, Nebraska on July 24th, 1919, the eighth of eleven children of Francis J. Kimbell and Gertrude M.... View Obituary & Service Information

The family of Velma I. Luhr created this Life Tributes page to make it easy to share your memories.

Send flowers to the Luhr family.