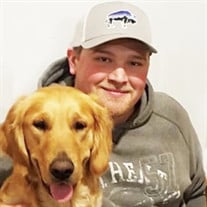 Trevor C. Meylor, 29, of Sloan, died on Thursday, December 23, 2021 from the injuries he sustained in a car accident. Services will be at 11:00 AM Thursday, December 30 at Christy-Smith Morningside Chapel, 1801 Morningside Ave. Sioux City, Iowa 51106, with Pastor Catie Newman officiating. The family will receive friends from 4:00 PM to 8:00 PM, a prayer service will begin at 7:00 PM on Wednesday, December 29, 2021, at Christy-Smith Morningside Chapel, 1801 Morningside Ave., Sioux City, Iowa. Online condolences may be left for the family at www.christysmith.com Trevor was born May 2, 1992, in Sioux City to Anthony "Tony" and Sherri (Brown) Meylor. He grew up and attended Westwood Public Schools, graduating in 2010. He was employed as a shift relief manager for Mid-American Energy at Port Neal. Trevor enjoyed riding on his side by side, buying and selling cars, planning trips for his family which included traveling to anywhere there was a beach. He had a special passion for his golden retrievers (Molly, Emma, and Ivy). Trevor always enjoyed time with his family, especially with his niece, Blakely and nephew, Lux. Survivors include his parents, Anthony "Tony" & Sherri Meylor of Sloan; a brother, Lee Meylor and Christy Van Lent and their children, Lux, Blakely, Cole, and Piper all of Sloan; aunts and uncles, Jo & Tim Prince, Julie & Todd Henrich, Marty & Julie Meylor, Sue & Brad Fenley, Jackie & Tom Hunter, Marcia & Arnie Wittmaack, Kris & Mike Miltenberger and Wade & Sally Brown; numerous cousins; other relatives; and his three golden retrievers, Molly, Emma, and Ivy. He was preceded in death by his paternal grandparents, Larry & Donna Meylor and maternal grandparents, Gordon and Roberta Brown.

The family of Trevor Clay Meylor created this Life Tributes page to make it easy to share your memories.

Send flowers to the Meylor family.