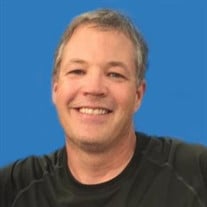 Todd David Clausen, 49, passed away peacefully on August 29, 2020, surrounded by his family, after a heroic 3 year battle with stage 4 pancreatic cancer. Visitation will be outdoors, with masks and social distancing, please, in front of Morningside Lutheran Church on Thursday, September 3rd, from 4-6:30 p.m., with an outdoor service at 6:30 p.m., Pastor Noah Ruppert, officiating. Private family services, and burial at Graceland Cemetery, will be on Friday, September 4th. Arrangements are with Christy Smith Funeral Home. Todd was born March 7, 1971, in Akron, Ohio, to Larry Duane and Dorothy Janice (Hendrickson) Clausen. He was raised in Sioux City, attending Longfellow Elementary, East Middle, and East High School, where he graduated with the Class of 1990. He obtained a bachelor’s degree from the University of South Dakota, where he was an active member of the Lambda Chi Alpha fraternity, and of the Strollers. He married Ivy Moss of Sgt. Bluff on April 17, 2004, and they made their home on an acreage just outside Sioux City, where they have raised their two children, Samuel Raine, 14, and Laryn Janice, 12, who are both students at East Middle School. During his career, Todd worked as a tracker for the probation department at Sgt. Bluff schools, and as a salesman of wine, pharmaceuticals, and, most recently and happily, Gerkin Windows & Doors. During one of his sales trips for Gerkin, Todd came upon a car on the shoulder of I-29 near Sisseton, SD, that was on fire with a family trapped inside. Together with another Good Samaritan, Todd broke out a window of the car, pulling to safety an infant and an adult passenger before the flames consumed the vehicle and a remaining passenger. For his heroism, Todd was honored by the Sisseton Wahpeton Oyate of The Lake Traverse Reservation with a blanket ceremony, and was later awarded the Carnegie Hero Award for Acts of Civilian Heroism, both of which he accepted with humility, grace, and appreciation. He struggled with unwarranted guilt in being unable to save the remaining passenger. Todd’s favorite activity was, with his wife Ivy, being a dedicated and loving parent to his children, Sam & Laryn. The most difficult part of his brave fight with cancer was his concern for their well-being. Todd and his family are very grateful to Dr. Nancy Schenk, the doctors and staff at the June E. Nylen Cancer Center, and Dr. Mark Truty, Dr. Travis Grotz, and the other doctors and staff at the Mayo Clinic, Rochester. Thanks to their expertise and loving care, Todd was a medical miracle, crushing the statistics for stage 4 pancreatic cancer survival. Todd’s participation in Dr. Truty’s cutting edge trials helped advance the treatment of pancreatic cancer. Todd and his family are also very grateful to the owners of Gerkin Windows & Doors in South Sioux City and his fellow employees there, for their extraordinary understanding, support, and assistance during his battle. He truly loved working there. Todd is survived by his wife Ivy, son Samuel, daughter Laryn, father Larry Clausen, sister Tami (Jim) Daane, brother Tim (Paula) Clausen, and grandmother Marvis Hendrickson. He was proceeded in death by his mother, Dorothy, and his nephew, Christopher Clausen Daane. Memorials have been established for Sam’s and Laryn’s educations at Great Western Bank.

Todd David Clausen, 49, passed away peacefully on August 29, 2020, surrounded by his family, after a heroic 3 year battle with stage 4 pancreatic cancer. Visitation will be outdoors, with masks and social distancing, please, in front... View Obituary & Service Information

The family of Todd David Clausen created this Life Tributes page to make it easy to share your memories.

Send flowers to the Clausen family.