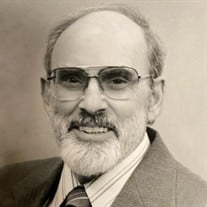 Thomas (Tom) T. Prout, 93, passed away Saturday, February 26, 2022, with family at his side. Memorial services will be at 11 a.m. Thursday, March 3, 2022 at Christy-Smith Funeral Home, Morningside Chapel located at 1801 Morningside Avenue, with a visitation one hour prior. Online condolences can be made by visiting www.christysmith.com. Tom was born on October 24, 1928, in Eveleth, MN, the son James and Fannie Prout. He attended Eveleth High School but joined the Army at age 17 prior to graduation to support the closing days of World War II effort despite some protestation from his father. He served in Company B of the 31st Infantry Regiment as a rifleman from September 1946 until January 1948. During this time he earned his GED. He then returned home to attend Eveleth Junior College. There Tom was active in multiple activities including wingback on the football team and ski jumping. Called back into service in January 1951 to 1953, he served in theatre during the Korean War, rising to Sergeant First Class (E-7), before a service-related injury prematurely ended his military career. Following the army, Tom went on to earn a degree in history at St. Cloud State where he met his wife, Marcella “Marcia” Klink. They met when Tom “reluctantly” but at the request of his roommate, agreed to give a couple of co-eds a ride back home to the “Range” for Christmas. Tom and Marcia were married June 19, 1954. After graduating from college, Tom went on to earn a master’s degree in education at UNC in Greeley, CO. In 1958, following a short stint in Hastings, NE where both he and Marcia began their teaching careers, they moved to Sioux City, IA. Siouxland became their permanent home where they raised their 3 boys, Thomas “Brad”, Paul, and Tyler. Tom taught history at Central High School and later became the social studies consultant at the then AEA12 providing both professional and curriculum development to northwest Iowa high school teachers for over 20 years until his retirement in 1990. During the 70’s and 80’s, Tom and his longtime friend, Henry Stoltze, tirelessly built a real-estate business on the side renovating and managing multiple apartment buildings and single-family homes in Sioux City. Tom used his carpentry skills to build a second home in Devils Nest, Nebraska overlooking the West end of Lewis and Clark Lake where many great family memories were made. Tom volunteered his time and talents on several local and state nonprofits including the local Lions Club and AARP. He also served many years as Treasurer for the Devil Nest Development. In addition to being a handyman that could fix almost anything, Tom enjoyed gardening, boating, waterskiing, travel and golf. He was also an avid reader and bibliophile. Tom instilled a love of sports into his family from early on. Not only did he enthusiastically cheer on his children and grandchildren he was a most ardent, unwavering husker fan. Tom and his wife enjoyed lifelong friendships with so many of their neighbors and colleagues in education over the 60+ years together in the Sioux City area. Everyone who knew Tom loved and admired him for his can-do attitude, integrity, intelligence, and easy-going good nature. Tom is survived by his wife of 67 years; two sons, Thomas B. (Michelle) Prout, Tyler (Melissa) Prout; daughter-in-law, Jill Prout; his 8 grandchildren, Molly (Alex) Castillo, Thomas (Sarah) Prout, Jonathon (WooJung) Prout, Benjamin Prout, Jack Prout, Alexander Prout, Katherine Prout, Lucas Prout; 5 great-grandchildren, Payton, Norah, Sam, Mateo, and Maximo; a brother, Jack; and a sister, Darlene. He was preceded in death by his parents; brothers, Leslie, Robert, and William; and his son, Paul Prout. Memorials may be sent to Christy-Smith Funeral Home, Morningside Chapel.

The family of Thomas Theophilus Prout created this Life Tributes page to make it easy to share your memories.

Send flowers to the Prout family.