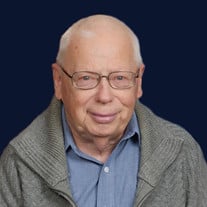 Thomas Franklin McKenna, 85, of Sioux City, Iowa, formerly of Clinton, IA died on Monday, June 24, 2019, at MercyOne Medical Center in Sioux City, Iowa. The family will receive friends from 4:00 PM to 8:00 PM on Friday, June 28, 2019, at Christy-Smith Morningside Chapel, 1801 Morningside Ave., Sioux City, Iowa. Online condolences may be made to the family at www.christysmith.com Thomas was born June 22, 1934 to Thomas H. and Mary (Montgomery) McKenna in Clinton, IA He graduated from St. Mary's Catholic High School in 1953. He served in the US Army following high school. Tom married the love of his life Dolorus, on Oct 13, 1966. Tom worked as a salesman selling clothing, lumber and hardware in the communities of Clinton, IA, Wickenburg, AZ and Sheldon, IA. The couple moved to Sioux City in 2011 to be closer to family. During his years in Wickenburg he was a member of the volunteer fire department and a very active member of the Elks Lodge # 2160. His hobbies included tinkering in the garage, lawn work, riding his bike, doing jigsaw and Sudoku puzzles and organizing everything from files to the items in his son's garage shop. Tom had it all written down in a notebook to make everything easy to find. Surviving are son, Thomas "Jon" (Melissa) McKenna of Sioux City, IA. 3 step-children; Lee Broadrick, Wickenburg, AZ, Lynn Broadrick, Clinton, IA and Lory (Barry) Rickertson of Wickenburg, AZ, 7 grandchildren; Brendan McKenna and his fiancée' Rachel, Sara McKenna, Becky (Mike) Temple, Daniel (Angela) Broadrick, Cina (Chuck) Borges and Chrisy Broadrick, Jacob Broadrick, numerous great grandchildren and great-great grandchildren, 3 sisters; Genevieve Schwarz, Madonna Waddell and Virginia Leu all of Clinton, IA along with numerous nieces and nephews. He was preceded in death by his parents, wife Dolorus, 2 brothers and a sister.

The family of Thomas Franklin McKenna created this Life Tributes page to make it easy to share your memories.

Send flowers to the McKenna family.