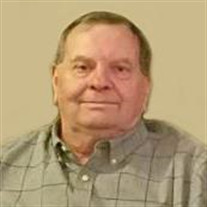 Thomas J. Howard, 78, passed away peacefully Thursday, Nov. 7, 2019, at his home in Hinton. Services will be at 6:30 p.m. Thursday at Christy-Smith Funeral Homes, Morningside. Private burial will take place at a later date. Visitation will be from 4:30 p.m. until service time Thursday at the funeral home. Thomas Joseph Howard, the son of Joseph Thomas and Mary (O’Brien) Howard, was born Sept. 23, 1941, in Mitchell, S.D. He attended St. Michael's school and graduated from Bishop Heelan Catholic High School. After high school Thomas then worked a few years for his father, until 1963 when Thomas enlisted in the U.S. Army and proudly served until his honorable discharge in 1966. On April 27, 1968, Thomas was united in marriage with Judy Ann Hoguewood in Sioux City. He was employed with US West Telephone Company for many years, working his way up into management before his retirement. After retirement, Thomas began to refinish and build furniture. This soon became one of his favorite hobbies, and he did beautiful work. He also worked for several years at Boys and Girls Home in the maintenance department. He and his wife, Judy, enjoyed playing cards with friends, fishing/camping trips and going out to eat every week with the Friday night gang. Thomas was a huge NASCAR fan and enjoyed watching westerns and listening to music. His greatest love was spending time with his family. Thomas is survived by his children, Troy (Heidi) Howard of Holstein, Iowa, and Julie (Darrell) Taylor of Hinton; six grandchildren, Ethan, Austin, Bailey, Shawna, Ben, and Sara; nine great-grandchildren; and many nieces and nephews. He was preceded in death by his parents; wife, Judy; and siblings, Richard Howard, Mary Lee Collins, and Mary Lou Washburn. The family has requested that memorials be directed to Disabled American Veterans.

The family of Thomas Joseph Howard created this Life Tributes page to make it easy to share your memories.

Send flowers to the Howard family.