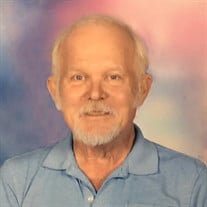 Mr. Thomas Myer Boyer, 69 of Olathe, Kansas died on Monday, July 1, 2019, in Olathe, Kansas. A Celebration of Life service will be at 1:00 PM on Saturday at Christy-Smith Morningside Chapel located at 1801 Morningside Ave. Sioux City, Iowa 51106. Interment will be in Memorial Park Cemetery, Sioux City, IA at a later date. A gathering with the family will immediately follow the service in the community room at the Christy-Smith Resource Center. The family will receive friends from 12:00 PM to 1:00 PM on Saturday, July 13, 2019, at Christy-Smith Morningside Chapel, 1801 Morningside Ave., Sioux City, IA Online condolences and special stories you have of Tom may be made to the family at www.christysmith.com Thomas was born August 8, 1949 in Sioux City, Iowa, to Richard and Mary Houtz Boyer. He graduated from East High School in 1967. While at East High he was a double letter in football and wrestling. He was a finalist at the Iowa High School All State wrestling. He served as an electronics mechanic in the Navy from 1969 until 1972. After his honorable discharge from the Navy he continued his education at University of Northern Iowa and later at Morningside College then at Wayne State College earning his bachelors of science degree and graduating with honors in 1976. He married Carla Rose in 1973 the couple later divorced in 1980. Tom worked for Dale Electronics in Columbus, NE and later for Gen10 in the Kansas City area before retiring in Olathe, KS Growing up he was a Boy Scout with Troop # 215, in1962 he received the God and Country award and later became an Eagle Scout in 1963 at the age of 14. He was the Lodge Chief of War Eagle Lodge 474 in 1966 and was initiated into the Vigil, the highest rank of the Order of the Arrow, an honorary camping society of the Boy Scouts of America. He was a Master Mason, 32nd Degree Scottish Rite Mason and a Nobel of the Mystic Shrine. He was a clown in both Wayne and Columbus, NE Shrine units. Tom cherished his time with his grandsons teaching them to play chess and cribbage. He also enjoyed watching them play sports. His hobbies included being a sports enthusiast, fishing, swimming and bowling. He received a certificate for being a 25 year participant in USBC Open Championship. country western dancing and making balloon animals for people everywhere he went, aka “Balloon Guy”.. Surviving are daughter, Mindy (Tony) Husa of Omaha, NE; two grandsons, Dylan A Gutierrez and Logan A. Gutierrez; and a sister, Mary Elizabeth Boyer of Sioux City, Iowa. He was predeceased by his parents and a brother, William Kline Boyer.

The family of Thomas Boyer created this Life Tributes page to make it easy to share your memories.

Send flowers to the Boyer family.