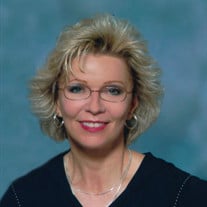 Theresa Lorraine Uhl, age 73, of Sioux City, IA died Thursday, February 3, 2022, at a local hospital. Mass of Christian Burial will be held at 12:00 p.m on Thursday, February 10, 2022, at Mater Dai Parish Church of the Nativity. A burial will follow at St. Mary’s Catholic Cemetery at Danbury, Iowa. Visitation will be held on Wednesday, February 9, 2022, from 4:00-7:00 p.m. with the rosary recited at 6:30 p.m. and a Parish Vigil service held at 7:00 p.m. at Christy Smith Morningside Chapel, 1801 Morningside Avenue. Theresa was born in Battle Creek, Iowa on December 13, 1948, the daughter of Fred and Lorraine (Neglass) Horstman. She was united in marriage with Richard Uhl on October 5, 1968, at St. Mary’s Catholic Church in Danbury, IA. Following their marriage, the couple lived in many different communities before moving and settling in Sioux City, IA in 1984. Richard preceded her in death on August 6, 2006, in Omaha, Nebraska. Theresa was a member of Mater Dai Parrish Nativity church who attended mass daily, and always prayed for others who were going through difficult times. She was an active member of the 3rd order Carmelites of the Carmelite Monastery in Sioux City, IA. She delivered meals and enjoyed visiting with those who were confined to their homes. She cherished the time she could spend with her church friends. She loved to plant flowers in her yard. She also was an avid exerciser and an active runner. Theresa loved attending all of her children’s sporting events no matter where they were held and loved to walk her dogs, Bella and Dakota. She loved being with her family and cherished her time with her grandchildren. Her life will always be remembered by her sons, Scott and his significant other, Renee of Johnston, Iowa and Travis and his wife, Kate of Iona, Minnesota. She is also survived by her four grandchildren, Carson and Sydney Uhl of Johnston, IA and Kayla and Eva Uhl of Lee Summit, MO. She’s survived by her four sisters, Sharon Sanford, Myrna Uhl, Shelia Ipsen, and Connie Horn; as well as one brother Martin Horstman. Theresa was preceded in death by her parents; her husband, Richard; and a brother, Reggie Horstman.

The family of Theresa Lorraine Uhl created this Life Tributes page to make it easy to share your memories.

Send flowers to the Uhl family.