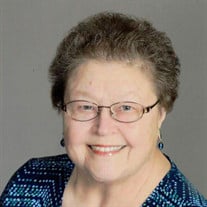 Thelma Mae Nelson, 78, of Sioux City, passed away after a brief illness on Thursday, January 27, 2022. Funeral service will be 11:00 a.m. Friday, February 4, 2022, at Grace United Methodist Church with a visitation held one hour prior to the service. Burial will be at Memorial Park Cemetery. Arrangements are with Christy-Smith Funeral Homes, Morningside Chapel. Thelma was born on January 11, 1944, in Carroll, Iowa, to Willard and Hazel Raasch. She grew up on the family farm just north of Odebolt, IA. After graduating from Odebolt Arthur High School in 1962, she moved to Sioux City, where she worked for the Dept. of Human Services for six years. She was married on July 1st, 1966, to Floyd Nelson at Grace United Methodist Church in Sioux City. After a brief employment at Mutual of Omaha, she started her own day care business, which she ran for 35 years. From a young age, Thelma discovered her passion for taking care of children, and that devotion carried on through her successful daycare business. Her nurturing spirit left a lasting legacy with the many children she looked after over the years. She was a faithful member of Grace United Methodist church for 56 years, where she volunteered for various church activities. In her free time, Thelma enjoyed reading, gardening, doing puzzles, watching movies, scrapbooking, decorating for the holidays, and most of all, spending time with her children and grandchildren. Thelma is survived by her husband, Floyd; her children, Susan Stephens of Portland, Oregon, Denise (Corey) O’Connor of Jefferson, South Dakota, and Douglas (Lori) Nelson of Las Vegas, Nevada; and seven grandchildren, Reegan, Easton, Brendan, and Brockton O’Connor, and Brayden, Cole, and Alexandra Nelson. She was preceded in death by her parents; her sister, Genevieve Schrunk; and brother-in-law, Charlie Schrunk.

The family of Thelma Mae Nelson created this Life Tributes page to make it easy to share your memories.

Thelma Mae Nelson, 78, of Sioux City, passed away after a brief...