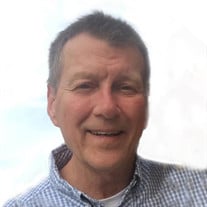 Steven Darrell Hanson, 63, of Sioux City, passed away on April 1, 2019, due to complications of Alzheimer's disease. He was surrounded by his wife and children. Memorial service will be 10:30 a.m. Friday at Morningside Lutheran Church, 700 S Martha St., in Sioux City. Burial will be in Memorial Park Cemetery with a luncheon to follow at the church. Visitation will be 4 to 8 p.m. Thursday, the family will be present 5 to 7 p.m. and a prayer service at 7 p.m., at Morningside Chapel, Christy-Smith Funeral Homes, 1801 Morningside Avenue, in Sioux City. Online condolences can be sent to the family at www.christysmith.com. Steve was born on Feb. 16, 1956, to Willis and Phyllis (Bolstad) Hanson, in St. Paul, Minn. He lived in the communities of Sioux Falls, S.D., Newcastle, Neb., Beaver Creek, Minn., and Watertown, S.D. before living his last 54 years in the city he loved, Sioux City. He graduated from East High School in 1974 and Morningside College in 1984. Steve carried his alumni status of both schools close to his heart. Steve married his first love, Rosemary "Rose" Niehus in 1983 and they were blessed with three amazing children, Christopher, David and Paige. He loved coaching his children and celebrated their successes in life and especially the caring adults they've grown to be. Steve was at his best when he made people smile and they made him smile right back. He surrounded himself with great friends and his easy-going nature, sense of humor and humbleness made him a friend to many. He relished in the success of others and made sure that when people succeeded, everyone knew. He made a difference with his family, friends, and community. His caring for others was chronicled in the Sioux City Journal in the saving the life of a woman because he and daughter, Paige, smelled a gas leak and took the time to care. Steve enjoyed music, golf, tennis, gardening, and spending time in the outdoors. He also enjoyed walking his dogs, Lucky and Cooper. His greatest passion was the love he had for his family, extended family and friends. No one loved the big family get togethers more than Steve. Steve was active in athletics and music at East High School and continued playing tennis at Morningside College. His love of sports was a fun part of his life as an ardent fan of the Minnesota Vikings, Twins, East High Black Raiders, Morningside College Mustangs and the Iowa Hawkeyes. Steve also had a special place in his heart for improving the performance of referees, umpires, and officials and frequently encouraged them to be better. Like so many other hard-working kids, Steve started his work life at a young age with paper routes and detasseling corn. He was a popular fixture as a haberdasher at Bob Knowler's Black Knight, The Britches Barn & Shirt Shed, as well as Lancer's Limited before beginning an award-winning sales career at Gateway and Gov Connection. His genuineness and sense of humor even landed Steve and his Lancer's Limited friends a spot on the hit show Entertainment Tonight. Appropriately, his last work was welcoming visitors from around the world to Sioux City at the Sergeant Floyd River Museum and Welcome Center with his smile. Steve will be greatly missed by his wife, Rose; two sons, Christopher (Andreea) of Broomfield, Colo., and David of Sioux City; a daughter, Paige of Sioux City; his parents, Willis and Phyllis Hanson; two brothers, Jeff (Jana) Hanson, and Brad (Carmel) Hanson; special sister, Ann (David) Mays; six brothers-in-law, Ken (Mary Myers Davis) Niehus, Tom (Angela) Niehus, Gerry (Monika) Niehus, Dan (Renee) Niehus, Doug Niehus, and Mark (Karla) Niehus; along with many special aunts, uncles, cousins, nephews, nieces, and grandnieces; as well as his many friends. Steve was preceded in death by his paternal grandparents, Wallace and Verona Hanson; maternal grandparents, Clarence and Inga Bolstad; father-in-law, Walter Niehus; mother-in-law, Rita Niehus; three uncles, Vonley Hanson, Bob Reynders, and Virgil Bolstad; and two aunts, Audrey Tvedt and Lois Bolstad.

Steven Darrell Hanson, 63, of Sioux City, passed away on April 1, 2019, due to complications of Alzheimer's disease. He was surrounded by his wife and children. Memorial service will be 10:30 a.m. Friday at Morningside Lutheran Church,... View Obituary & Service Information

The family of Steven Darrell Hanson created this Life Tributes page to make it easy to share your memories.

Steven Darrell Hanson, 63, of Sioux City, passed away on April...

Send flowers to the Hanson family.