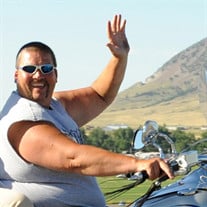 Steven L Archer, 62, of Smithland Iowa, passed away Thursday, March 7 at Mercy Medical Center in Sioux City Iowa surrounded by his loved ones. A memorial service will be held at a later date. Christy - Smith Funeral Homes, Morningside, is assisting the family with arrangements. Steven Lawrence Archer, the son of Ted and Janet (Cox) Archer was born March 10, 1956 in Pisgah, IA. At the age of 18 he went to work at Dubuque in Denison, IA. He later started at Farmland in Denison, IA where he retired in 2015. In October of 1993 Steve married the love of his life, Debby Archer at the Ingemann Danish Lutheran Church near Moorhead, IA. He loved riding his motorcycle, especially with his wife on the back. They loved their trips to the Black Hills and the Sturgis Rally in South Dakota. His family was everything to him. He loved every minute he got to spend with his grandchildren. Steven is survived by his step-daughters, Karri (Clinton) Ham of Ceresco, NE, Krista (Don) Sulsberger of Smithland, IA; nine grandchildren, Jake (Breanna) Ham, Jesse Ham, Christopher Ham, Cody (Kimberly) Ham, Molly Ham, Krista Lee Sulsberger, Chyanne Sulsberger, Derrick Sulsberger and Alabama Sulsberger; eight great-grandchildren; his mother, Janet Archer of Kennebec, IA; his siblings, Paul (Peggy) Archer of Moorhead, IA, Peggy (Mike) Berg of Dunlap, IA; and many other relatives and friends. He was preceded in death by his father, Ted, and his wife, Debby.

The family of Steven L. Archer created this Life Tributes page to make it easy to share your memories.

Send flowers to the Archer family.