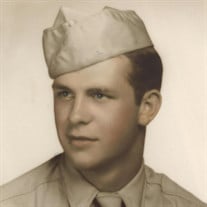 Stephen “Steve” Soukup Jr., 92, of Sioux City, passed away on Tuesday, May 19, 2020 at a local hospital. Funeral service will be held at 10:30 a.m. on Tuesday, May 26, 2020 at Christy-Smith Funeral Homes, Morningside Chapel, located at 1801 Morningside Ave. Visitation will be held one hour prior. Burial will be at Memorial Park Cemetery following the service. Due to COVID19 restrictions, during the visitation only 10 people will be allowed into the building at a time. However, up to 50 people will be allowed to attend the funeral service. Stephen Albert Soukup Jr., the son of Stephen Sr. and Bertha (Montange) Soukup, was born September 24, 1927 in Sioux City. He attended East High School and served his country for over 20 years. During his U.S. Army/Reserve career, he obtained the rank of Sergeant First Class and was decorated with WWII Victory and Korean Occupation Medals. On April 15, 1950 Steve was united in marriage with Margith “Peggy” Bergerson. The couple made their home in Sioux City where he was the assistant superintendent at Swift and Company for 43 years. He survived the Swift/KD Station explosion in 1949. Steve was a lifelong member of Immaculate Conception Catholic Church, as well as a lifelong resident of Morningside. His hobbies included fishing, gardening, and working on cars. He was a master fisherman of the Missouri River South Dakota dam system and owned 3 boats up until he was 85 years old. He owned a car before his South Dakota parents from whom he inherited a tireless work ethic. Steve is survived by his children, Connie Soukup, Carla Buschmann, and Stephen “Todd” (Laurie) Soukup; grandchildren, Angel (Gary) Bennier, Brady Buschmann, and Kallee Buschmann; great-grandchildren, Lauren, Chandler, Aspen Bennier, and Kingstyn Poznanski; great-great-granddaughter, Ainslee Grim; and close companion, Kitty Bolles. He is preceded in death by his parents, wife, Peggy; son, Barry; brother, Vernon; and sisters, Gloria and Donna. In lieu of flowers the family requests that donations be made to the American Legion Post #307 109 E 19th St, South Sioux City, NE 68776.

The family of Stephen Albert Soukup Jr created this Life Tributes page to make it easy to share your memories.

Send flowers to the Soukup family.