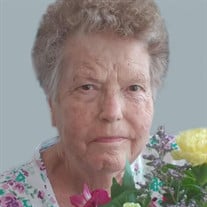 Stella J Serviss, 80, of Sioux City passed away Jan. 7, 2021 surrounded by family. Visitation will be 5:00-7:00 p.m., Sunday, January 17, 2021 at Christy-Smith Funeral Home, Morningside Chapel located at 1801 Morningside Ave. in Sioux City. Graveside service will be 2:00 p.m., Monday, January 18, 2021 at Memorial Park Cemetery. Stella was born July 20, 1940 to Leslie and Gretchen (Lintt) VanEvery in Gordon, NE. At the age of 1 they moved to Sioux City where she was a lifelong Riversider. She graduated from Central High in 1958. She married Nolan Serviss on March 4,1958 in Sioux City and they were married until his passing on December 24,2012. She was employed with Zenith until they closed. She then went on to school to become a Medical Transcriptionist and Supervisor. She worked from 1979 to 2010 for St. Luke's. She was of the Lutheran Faith. Her greatest love in life was caring for her loved ones until their final day. Her life was being with her kids, grandkids, and great-grandkids as much as possible, rooting them on in as many activities as she could attend. She also enjoyed her GOGO Girls card club that got together every Friday for a day of cardplaying and lunch until she could no longer attend due to health reasons. She then enjoyed everyday visits from her childhood friend, Gale, as they played a game of cards over a morning cup of coffee until her final day. He was more than a friend; he was a brother. Survivors include two daughters, Tammy and Mike Asher of Kernersville, NC and Teresa and Dan Leonard of Salix IA; two sons, Rick Serviss and Ella Benson of Sioux City and Les Serviss of Sioux City; 4 grandkids; 10 great-grandkids; special nephew who she helped raise, Doug and Jessica Sliter of Sioux City; foster daughter, Sherry Patterson of LeMars, IA; and a special niece found later in life, Ianthe Coover of Wahoo, NE; a brother and sister-in-law; and many other nieces and a nephew. Preceding her in death are her husband; parents; sister, Alice Sliter; 2 brothers-in-law; sister-in-law; and a niece and nephew. A special thank you goes out to the Dunes Dialysis Center staff and lifelong neighbors and health care supporter, Becky and Lyle Chicoine. In lieu of flowers/plants a contribution would be greatly appreciated to help pay for her final medical expenses.

The family of Stella Jean Serviss created this Life Tributes page to make it easy to share your memories.

Send flowers to the Serviss family.