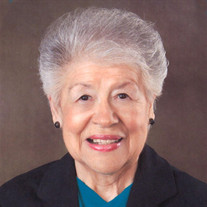 Socorra Juanita "Granny Coke" Rol, 95, of Sioux City, passed away peacefully to be with her Lord and Savior Saturday, December 28, 2019 at a Sioux City Hospital. A funeral service will be 10:30 am Tuesday January 7, 2020, at Southern Hills Baptist Church with Pastor Dave Miller officiating. A private family burial will be in Memorial Park Cemetery. A visitation will be 5:00 pm to 7:00 pm Monday January 6, 2020, at Christy-Smith Funeral Home, Morningside, with the family present from 6:00 pm to 7:00 pm and a prayer service at 7:00 pm. Socorra was born June 12, 1924, in Wichita, KS to Pedro and Soledad (Becerra) Bata. At the age of six, the family moved to Sioux City, IA. She attended Hopkins School and went on to graduate from Central High School in 1941. She was a very hard-working woman. Socorra worked for several packing plants, including Armors, Swifts, and Cudahy’s. She met the love of her life, Robert Rol, at Cudahy’s. They married December 31, 1943. They had four children, Sandy, Randy, Linda, and Leesa. Socorra was a beautiful person, inside and out, and a loving compassionate woman. Her heart had limitless capacity for caring and compassion. She would visit her friends often bringing love, gifts, food, or whatever was needed. Socorra loved her family and her eyes would just light up when they would come to visit her. Socorra’s eyes couldn’t get brighter when seeing all of those beautiful grand babies. She was quite talented and very artistic, painting pictures on T-shirts for the grandchildren or just coloring with them. She loved crocheting pillowcases, dollies, or embroidering dishtowels for all the family members. Her favorite thing to do was going South for a couple months of winter with her husband and many snowbird friends. She would load up that trailer with all kinds of clothing and canned goods with things to pass out on their trip to less fortunate people on the way. Then, of course, she would fill it back up when coming home with gifts to bring home for family and friends. Socorra is survived by her children, Randy (Peggy) Rol, Sandy Rol, Leesa (Richard) Wynn, all of Sioux City; siblings, Rachel LaScala of Sioux City, Pete (Linda) Bata of Davenport, IA; sisters-in-law, Victoria Bata of Sioux City and Gladys Bata of Las Vegas, NV; 13 grandchildren, Kurtis Bradham, Dean Bradham, Robbi Johnson, Shane Rol, Stacy Clay, Cameron Rol, Nick Rol, Ben Rol, Chad Ritz, Matt Ritz, Vanessa Larned, Brandon Wynn, Socorra Roth; 21 great-grandchildren, Derik Bradham, Bob Bradham, Faith Bradham, Nathan Johnson, Riley Johnson, Shane Rol, Alex Rol, Justin Rol, Bailey Rol, Cameron Rol, Sawyer Rol, Easton Ritz, Addison Ritz, Phoenix Larned, Holland Larned, Hannah Stewart, Leah Stewart, Savannah Wynn, Braydon Wynn, Eldon Roth, Nicholas Roth, (and one on the way); three great-great-grandchildren, Donovan Bradham, Melaiyah Bradham, Braxton Bradham, (with one more on the way); and many other relatives and friends. She was preceded in death by her husband, Robert Rol; parents, Pedro and Solidad; two brothers, Joe Bata and Efern Bata; two sisters, Anna Barner and Dora Seaton; her daughter, Linda Rol; a great-grandson, Skylar Johnson.

Socorra Juanita "Granny Coke" Rol, 95, of Sioux City, passed away peacefully to be with her Lord and Savior Saturday, December 28, 2019 at a Sioux City Hospital. A funeral service will be 10:30 am Tuesday January 7, 2020, at Southern... View Obituary & Service Information

The family of Socorra Jaunita Rol created this Life Tributes page to make it easy to share your memories.

Send flowers to the Rol family.