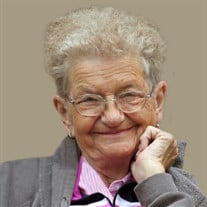 Shirley A. Stokely, 82, died Sunday, November 10, 2019, at Unity Point–St. Luke’s Medical Center in Sioux City, IA. A visitation will be 4:00 pm to 7:00 p.m., Wednesday, November 13, 2019, at Christy-Smith Funeral Homes, Morningside Chapel, with a prayer service at 6:00 p.m. A memorial service will be 10:30 a.m., Thursday, November 14, 2019, at Christy-Smith Funeral Homes, Morningside Chapel, with burial to follow in St. Peter’s Cemetery in Jefferson, SD. Online condolences can be made to the family at www.christysmith.com. Shirley Ann Walin, the daughter of Russell and Martha (Duffek) Walin was born July 13, 1937, in Lincoln, NE. She graduated from high school in Lincoln. Shirley moved to Jefferson, SD, where she lived for 33 years. In February of 1963, Shirley was united in marriage with Paul Stokely. She worked at the American Legion, was a manager of food service at Horizon, and later worked at Gateway. Shirley retired in 2004, but continued to work as a Senior Companion. Paul died in April of 2007. Shirley enjoyed fishing, camping, and being outdoors. Her greatest love, however, was spending time with her family. Shirley is survived by her children, Renee Ann (Nick) Nichols of Highland, IL, Russell Stokely of Vermillion, SD, Patty (Tony) Verdin of Sioux City, Mike (Leann) Stokely of Jefferson, Alan (Pamela) Stokely of North Sioux City, SD, Tony (Teri) Stokely of Elk Point, SD; 34 grandchildren; 53 great-grandchildren; her loving cat, Molly; and many other relatives and friends. She was preceded in death by her parents; her husband; an infant son, Randy; and two great-grandchildren, Hunter and Alyssa.

The family of Shirley Ann Stokely created this Life Tributes page to make it easy to share your memories.

Send flowers to the Stokely family.