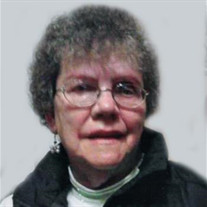 Shirley Ann Hahn-Cox, 79, of Evansville, formerly Sioux City, died Oct. 28, 2019, in Evansville. Services will be 1 p.m., Thursday, Nov. 7, at Morningside Chapel, Christy-Smith Funeral Homes in Sioux City. Burial will follow in Memorial Park Cemetery. Visitation will be one hour prior to the service on Thursday at the funeral home. Shirley was born in Evansville on Oct. 21, 1940, the daughter of Raymond and Goldie (Troop) Underhill. She attended and graduated from Evansville Community Schools. She came to Sioux City in 1965. She was married to Eugene Cox on Nov. 7, 1957. The couple later divorced. Shirley was then united in marriage with Richard Hahn on July 6, 1990, in Elk Point, S.D. He passed away on Dec. 21, 2010. Shirley served as a foster mother and caretaker for her own children for many years. She enjoyed playing cards, gambling in North Sioux City, and spending time with her children and all of their families. In her earlier years, she enjoyed swimming. She is survived by her daughter, Becky Valentine; sons, Stanley (Julie) Cox, Terry (Theresa) Cox, and Michael Cox. She is also survived by eight grandchildren; many great-grandchildren; and one sister. Shirley was preceded in death by her parents; her second husband, Richard Hahn; three sisters; and two brothers.

The family of Shirley Ann Hahn created this Life Tributes page to make it easy to share your memories.

Send flowers to the Hahn family.