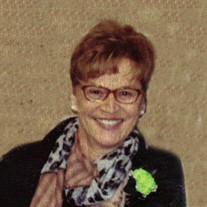 Sheyrel Rae Kramer, 74, of Sioux City, Iowa died on Tuesday, March 12, 2019, in Sioux City, Iowa. A funeral service will be at 10:30 a.m. on Tuesday, March 19th at Mater Dei Parish - Nativity Church located at 4242 Natalia Way Sioux City, with Father Daniel Rupp officiating. Interment will be in Memorial Park Cemetery, Sioux City, IA. Visitation will be from 4:00 p.m. to 7:00 p.m on Monday, March 18, 2019, at Christy-Smith Morningside Chapel, 1801 Morningside Ave., Sioux City, Iowa. A prayer service will begin at 6:30 p.m. Online condolences may be made to the family at www.christysmith.com Sheyrel was born April 13, 1944, to Ralph and Myrtle (Beste) Wiebelhaus in Yankton, SD. She grew up on the family farm and attended country school at Golden Prairie School just a few miles from home. She graduated from Laurel High School in Laurel, NE. Sheyrel worked at the Cedar County Court House for a few years while Jim served in the U. S. Army. On February 22, 1966 Sheyrel was united in marriage with James Kramer in Laurel, NE. They then started a family in Sioux Falls, SD. Five years later the family moved to Sioux City. Sheyrel provided day care in their home for many years while her kids were growing up. Later in life she was a loyal and dedicated employee for her employers with Sioux City Ford being her last employer prior to retirement. Sheyrel was a long time member of the Mater Dei Parish - Nativity Church, she had a great love of horses and enjoyed riding. In her leisure time she enjoyed gardening around her house, attending the activities for her children and grandchildren. Most of all she loved her family and all holiday gatherings. Surviving are her children, Lori (Bill) Melville of Sioux City, IA, Lisa Kramer of Houston, TX, Mike (Cyndi) Kramer of Sioux City, IA, Steve (Tonya) Kramer of Sioux City, IA; eight grandchildren, Ashley Morgan, Kayley Morgan, Kyle Morgan, Steven Johnson, Justin Johnson, Colton Kramer, Cameron Kramer, and Chloe Kramer; her dog and very special companion, Kandy; along with many other relatives and friends. She was preceded in death by her husband, James and her parents.

The family of Sheyrel R. Kramer created this Life Tributes page to make it easy to share your memories.

Send flowers to the Kramer family.