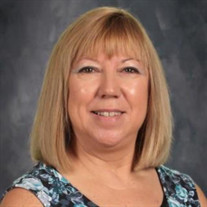 Sherry J. Hoopingarner, 62, Tuesday, died August 10, 2021, following a lengthy illness. A visitation will be 4:00 pm to 7:00 pm Monday, August 16, 2021, at Christy-Smith Funeral Homes, Larkin Chapel, 2320 Outer Drive North, with a Prayer Service at 7:00 pm. Mass of Christian Burial will be 10:00 am Tuesday, August 17, 2021, at the Cathedral of the Epiphany Parish-St. Boniface Catholic Church with burial to follow in Calvary Cemetery. Online condolences may be expressed to the family at www.christysmith.com. Sherry Jean Jurgensen was born March 28, 1959, in Mason City, IA to Harold and Verna (Plock) Jurgensen. Her family later settled in Cherokee, KS. Growing up in Cherokee, she participated in Crawford County 4H projects. Sherry was awarded Grand Champion in Style Review and moved on to be judged at the Kansas State Fair. She attended Cherokee schools and participated in basketball, track, cheerleading and volleyball. Sherry went to state several times as part of the Southeast High School Lancers’ volleyball team. She graduated from Southeast in 1977 and attended Pittsburg State for about 1 year. She worked in fast food restaurants and later earned her Certified Nursing Assistant credential. While in Pittsburg she met Kerry Shackelford of Sioux City, IA. In 1980 they were married at Cherokee United Methodist Church. They returned to Sioux City, IA to make a home. From that union, Amber was born in 1986. The marriage ended in 1990. Sherry enjoyed working as a secretary for a period of time, but the most rewarding job for her was caring for the residents at Countryside Retirement Home. Sherry was proud of her daughter and occasionally brought Amber to the Home to meet staff and residents. While at Countryside she met Tom Hoopingarner. She enjoyed telling people she trained Tom on his first day at Countryside, and was still training him. Sherry and Tom entered into holy matrimony in 1992 at St. Boniface Catholic Church. Sherry gave birth to their son Steven in 1997 and their daughter Kaitlyn in 2000. She worked as a home maker and volunteered some of her time to Girl Scouting, teaching Catholic religion classes, and participating with the West High School Band Parent Boosters. In 2008, Sherry began working for Sioux City Community Schools as an Instructional Assistant. She genuinely cared for the students she had opportunity to work with. She loved many activities and hobbies including development of an ever-changing yard sanctuary for birds, flower gardening, re-potting house plants, shopping for her family, site-seeing motorcycle rides, camping, visiting family in Kansas and Iowa, chatting, and telling jokes. Sherry is survived by her husband Tom; her children, Amber (Bill) Boucher of Sioux City, Steven (Kristen) Hoopingarner of Marshalltown, IA, Kaitlyn (Payton Lockmiller) Hoopingarner of Sioux City; siblings, Gary Jurgensen of Aurora, MO, Mary Ann (Ralph) Ulery of Scammon, KS, Larry (Judy) Jurgensen of Uniontown, KS; and many other relatives and friends. She was preceded in death by her parents, Harold on August 8, 2007 and, most recently, Verna on August 8, 2021

The family of Sherry Jean Hoopingarner created this Life Tributes page to make it easy to share your memories.

Send flowers to the Hoopingarner family.