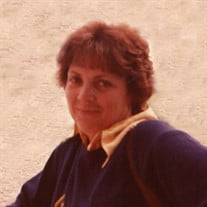 Sherlyn Jean (Wade) Van Dusen died August 25, 2019 in Sioux City. She was 78 years old. She was born on May 17, 1941 in Sioux City to Clyde and Eleanor (Campbell) Wade. Sherry’s birth mother died when she was only two years old. She went to live with Rev. Orville and Mrs. Leota Knowlton. Mrs. Knowlton was Sherry’s mother’s sister. The Knowltons introduced their son Duane to Sherry, the family then moved to Council Bluffs; and later relocated to Ray, Arizona. Sherry grew up in Arizona and graduated from Ray High School in Ray, Arizona. She then went on to attend Arizona State College for one year. Sherry returned to Sioux City to live with her birth father, Clyde Wade. She spent one-year at Nettleton Business College in Sioux City. Sherry met and married Patrick Leonard Van Dusen on May 20, 1983. On April 1, 1984, Sherry and Patrick welcomed a son, Jeffrey John Van Dusen. Sherry and Patrick raised Jeffrey together in Sgt. Bluff until Patrick’s passing on February 16, 2000. They shared 17 years of marriage for better or for worst. During Sherry’s work life, she worked for several companies including: Roberts Dairy, Wheelchair Transportation, Answer Iowa, Penn Life Insurance Company, and her last place of employment was MCI Telecommunications where she worked until retirement. She enjoyed and was very good at crocheting. She made and shared many wonderful projects with her family and friends. Sherry was also very outspoken about sharing the good word about Jesus and bringing joy to other peoples lives. Her other great joy in life was her daughter-in-law Gloria, and grand kids: Ely, Jocelyn, Jaydan, and Jack. Survivors include: Jeff and Gloria and their four children, Klaris Wade (her brother’s wife), Steve and Tom Wade, Jim and Maggie Campbell, Merrilee (Tuckson) Harris, and her two lifelong friends: Paula Bonham and Clarice David. Sherry was preceded in death by her parents Clyde and Eleanor Wade, Rev. Orville and Mrs. Leota Knowlton, her brother Dale Wade, Russell and Gertrude Carver, Arlo and Dorothy Campbell, Duane Knowlton, Artis (Carver) Tuckson. Sherry knew that the Lord would take care of her, her entire life and she was not wrong. Isaiah 41:10. So do not fear, for I am with you; do not be dismayed, for I am your God. I will strengthen you and help you; I will uphold you with my righteous right hand.

The family of Sherlyn Van Dusen created this Life Tributes page to make it easy to share your memories.