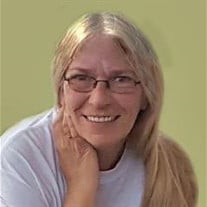 Shelly J. Grover, 58, entered into rest on Friday, December 13, 2019, at her residence surrounded by her loved ones in Sioux City, IA. A visitation will be 4:00 pm to 7:00 pm Wednesday, December 18, 2019, at Christy-Smith Funeral Homes, Morningside. A funeral service will be 2:00 pm Thursday, December 19, 2019 at Christy-Smith, Morningside, with burial to follow in Memorial Park Cemetery. Shelly Jane Murdock, the daughter of Roy and June (Heaton) Murdock was born March 29, 1961, in Sioux City, IA. She received her education from West High School. Shelly went to work in customer service at Walmart, and later was employed at Gateway for ten years. Shelly then went back to school at WITCC and received her Bachelor’s Degree in Accounting. She worked for Nolles and later for Center for Siouxland. Shelly enjoyed yardwork, gardening, knitting, crocheting and going for walks with her niece Tina and their dogs. Shopping with her daughter Anita and daughter in law Charlee was her girl get away time. She loved it when her son Scotty would come over and spend time with her helping with things around the house, though she could do some of it on her own she loved the feeling of her baby taking care of his mom. It meant everything to Shelly watching her grandbabies growing up reaching new milestones and achievements. She was always so proud of them all. She loved keeping up with her dearest lifelong friends Jody and her husband Rod and Joey eating out at dinners. She also enjoyed traveling to National Parks and camp grounds with her love Phil. Being in nature with Phil and theirs dogs Spike and Buddy was her peace. Shelly is survived by her soulmate, Phil Albert; children, Anita (Seth) Callahan and Scott (Charlee) Grover; grandchildren, Connor, Ian, Drake, Julian, Axal, and Christian, all of Sioux City; and many other relatives and friends. She was preceded in death by her parents and 12 siblings.

The family of Shelly Jane Grover created this Life Tributes page to make it easy to share your memories.

Send flowers to the Grover family.