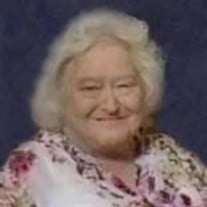 Sharon A. LaFleur, 75, died Tuesday, October 26, 2021, at Unity Point Health-St. Luke’s Medical Center in Sioux City, IA. A visitation will be 4:00 pm to 7:00 pm Monday, November 1, 2021, at Christy-Smith Funeral Homes, Larkin Chapel, 2320 Outer Drive North. A funeral service will be 12:00 pm Tuesday, November 2, 2021, at Christy-Smith, Larkin Chapel, with burial to follow in Logan Park Cemetery. Online condolences may be expressed to the family at www.christysmith.com. Sharon Ann Ehlers, the daughter of Robert and Ruby (Olson) Ehlers was born July 19, 1946, in Sioux City, IA. She graduated from Central High School in 1964. Sharon enlisted in the U.S. Army in 1966 and served honorably until her discharge. On March 4, 1967, Sharon was united in marriage with Howard LaFleur in Sioux City. Sharon was a homemaker and a mother. Howard died September 22, 2006. Sharon was a member of a CB Club, was in a dart league, and even owned an upholstery shop with her husband. She also like to fish and craft. Sharon was a very active person and took care of her mother in her later years. Sharon enjoyed getting together with her family on special occasions and was known for her German dinner she would make which Ann took over making and would have her up for. Sharon also liked to visit the casinos with her mother, daughter, and daughter-in-law as often as she could. Paul would keep her on her toes to keep her going. She also enjoyed her conversations with Kathy whenever they got together. Sharon is survived by two sons, Larry (Ann) LaFleur and Dave (Kathy Pullis) LaFleur; a daughter, Rosemarie (Paul Desy) LaFleur, all of Sioux City; 12 grandchildren; 11 great-grandchildren; two brothers, Ronnie (Diane) Ehlers of Nebraska and Mike Ehlers of Tripp, SD; and many other relatives and friends. She was preceded in death by her parents; husband; a daughter, Betty LaFleur; and brothers, Bobby, Gary, and Larry.

The family of Sharon Ann LaFleur created this Life Tributes page to make it easy to share your memories.

Send flowers to the LaFleur family.