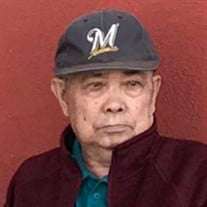 Sao S. Sayavong, 89, of Sergeant Bluff, died Saturday, Dec. 1, 2018, surrounded by his loving family. Services will be 10:30 a.m. Wednesday at St. Joseph Catholic Church in Salix, Iowa, with the Rev. Michael Erpelding officiating. Burial will be in St. Joseph Cemetery. Visitation will be 4 to 8 p.m. today, with a prayer service at 7 p.m., at the church. Arrangements are under the direction of Morningside Chapel, Christy-Smith Funeral Homes. Online condolences can be sent to the family at www.christysmith.com. Sao was born on Aug. 22, 1929, in Ban Paksan, Laos. He married Khamphay Syharath-Vanhla in 1948. They were farmers. In 1988, they entered the United States as refugees. Sao became a United States citizen on March 26, 2004. He loved hunting, fishing, and spending time with his grandchildren. He was a member of St. Joseph Catholic Church in Salix. Survivors include his children, Phimphone Inthongsay of Storm Lake, Iowa, Phimmasone Philavahn of Storm Lake, Khonesavanh Syharath of Sioux City, Chanthone Srimeaung of Storm Lake, Houi Keomala of Mt. Pleasant, Iowa, Poui S. Sayavong of Sioux City, Khamla S. Vongnalath of Sioux City, and Loni Bannavong of Sergeant Bluff. He was blessed with many grandchildren, great-grandchildren, nieces and nephews. He was preceded in death by his parents; wife, Khamphay; four sons; and a daughter.

The family of Sao S. Sayavong created this Life Tributes page to make it easy to share your memories.

Send flowers to the Sayavong family.