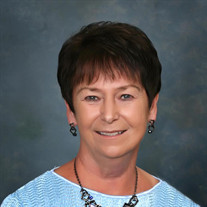 Sandra S. “Sandy” Sypersma, 72, died Friday, August 14, 2020, at Unity Point-St. Luke’s Medical Center in Sioux City, IA. A Memorial Mass will be 10:30 am Thursday, August 20, 2020, at Mater Dei Parish – Nativity Catholic Church with visitation one hour prior. The family is being assisted with arrangements by Christy-Smith Funeral Homes, Morningside Chapel. Sandra Sue “Sandy” Sypersma, the daughter of Carl and Bernice (Fitzpatrick) Treiber was born March 31, 1948, in Danbury, IA. She graduated from Danbury Catholic High School in 1966 and went on to attend Stewart’s School of Beauty. Sandy was then employed at First National Bank in Sioux City as a Bookkeeper. On October 11, 1969, Sandy was united in marriage with Harold Sypersma at the Cathedral of the Epiphany in Sioux City. She was a homemaker and later ran an in-home daycare. In 1982, the couple moved to an acreage outside of town, and Sandy began a house cleaning business. Sandy and Harold were members of the Lawton Saddle Club, which included countless trail rides and weekend gatherings. Her love of animals included horses, birds, and especially her Sheltie dogs. Sandy loved yard work and being outdoors and kept an immaculate yard, garden, and flower beds. The couple wintered in Arizona in later years and went on many camping trips, frequenting the grounds in Yankton, SD. They also cherished their trips to the Black Hills in South Dakota. Sandy is survived by her husband, Harold of Sioux City; children, Shawn (Sheila) Sypersma of Hinton, IA, Sheri (Cody) Sypersma-Griffin of Moville, IA; grandchildren, Zach Sypersma, Kayla Sypersma, Chase Sypersma, and Colton Griffin; her Sheltie, Sissy; siblings, Bob (Dianna Kovarna) Treiber of Danbury, Bonnie (Mike Nielsen) Kallsen of Maplteton, IA, Sharlene (Jim) Novak of Omaha, NE, Tim (JoAnn) Treiber of Danbury, Todd (Donna) Treiber of Mapleton; and many other relatives and friends. She was preceded in death by her parents.

The family of Sandra "Sandy" Sue Sypersma created this Life Tributes page to make it easy to share your memories.

Send flowers to the Sypersma family.