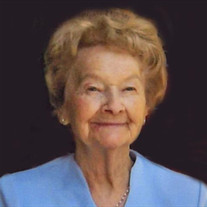 Ruth Virginia Kobes passed away on December 15, 2018, at Good Samaritan in Le Mars, IA. Memorial services will be held Saturday, December 22, at 11:00 am at Christy-Smith Funeral Homes, Morningside Chapel. Ruth was born to Arthur Sigler and Helen Nansen Sigler on April 26, 1921, on her grandparents’ farm near Creighton, Nebraska. Her mother passed away during childbirth when Ruth was 7 years old. From the age of 7 to 11, Ruth was raised by her Uncle Charlie and Aunt Mary Carlow on a farm near Bloomfield. At 11 she moved with her father and siblings to Sioux City. Ruth married Albert LeRoy Kobes on October 2, 1937, in Elk Point, SD. They lived most of their married life on South Maple St. in Sioux City while Albert was employed at Wincharger/Dyna Tech/Groschopp. After they married first Albert and then Ruth became members of the Christian Reformed Church in Sioux City. Ruth was a homemaker who enjoyed baking, cooking, and gardening, and was devoted to her husband and raising their five children. Ruth is survived by her daughter, Patricia of Dallas, TX, son, Wayne of Sioux Center, IA, daughter, Virginia (Ed) of Grand Rapids, MN, and son, Richard (Fern) of Pine River, MN; a sister, Betty Anderson of Salt Lake City, UT; half-sisters Donna Daniel of Carrolton, TX, Caroline Burrows of Rogers, AR, Marilyn Smythia of Miller, MO, and Glenda Perryman of Las Vegas, NV; half-brother Chuck Sigler of Florrisant, MO; stepbrother Dick Peck of Emma, AR; and 16 grandchildren and many great-grandchildren and great, great-grandchildren. She was preceded in death by her husband Albert, her daughter Janice, her granddaughter Heather, her great-granddaughter Bella, her parents, her brother Leonard Sigler, her sisters Edith Kobes and Lorraine Vanderlinden, her half-sister Marlene Mustain, and her stepmother Gladys Butler.

The family of Ruth Virginia Kobes created this Life Tributes page to make it easy to share your memories.

Send flowers to the Kobes family.