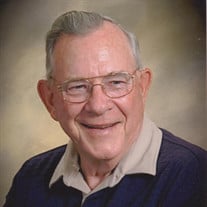 Ruskin W. Golden, 84, of Sioux City, Iowa passed away Friday, March 26, 2021 at a local hospital. A memorial service will be 11:00 a.m., Saturday, April 10, 2021 at Morningside Baptist Church in Sioux City with Reverend David Sowers officiating. Visitation will be one hour prior. The service will be livestreamed for those who wish to view the ceremony virtually at https://tinyurl.com/rgolden. Ruskin William Golden was born March 25, 1937 to Ruskin and Ruth (Keene) Golden in Miles City, Montana where he spent his childhood. In 1954, at age 17, he joined the U.S. Navy. While with the Navy, he spent time in Hawaii, California, Illinois, Washington, and Japan. He served his country for 21 years, ending his career in Fergus Falls, Minnesota with a rank of Chief. On August 15, 1965 Ruskin was united in marriage to Mary Alice Schaub at a Navy Chapel. Together they raised four children. He worked for Metz Baking Company as chief engineer from 1976-1999 during which the family lived in Fergus Falls, Minnesota, Madison, Wisconsin, and Sioux City, Iowa. Ruskin and Mary began wintering in Foley, Alabama in 2000 where Ruskin enjoyed volunteering at the Baldwin Baptist Campground as a handyman and lead volunteer coordinator for 17 years. Ruskin was a hard worker throughout his life. He had a deep love for his church and family. When he wasn’t volunteering doing ground maintenance for churches, Ruskin enjoyed a number of activities. He was an outdoorsman. He enjoyed hunting, fishing, feeding the birds and other critters, and was a dog lover. He was also a sports enthusiast playing softball (pitched a perfect game!), hockey, football, bowling, billiards, and tennis. Ruskin even coached boys and girls hockey, baseball, and girls softball. He was an avid reader and liked a good card game. Ruskin is survived by his wife, Mary Golden of Sioux City; four children, Christine Macarter of San Bernadino, California, James Golden of Sioux City, Iowa, Michelle Golden of Billings, Montana, and Ruskin Golden of Eudora, Kansas; 10 grandchildren; 19 great-grandchildren; two great-great-grandsons; and a brother, Frank Golden of Billings, Montana. In lieu of flowers, the family requests you consider making a donation to one of Ruskin's favorite charities: St. Jude's, Boys Town, and Veterans Affairs.

The family of Ruskin W. Golden created this Life Tributes page to make it easy to share your memories.

Send flowers to the Golden family.