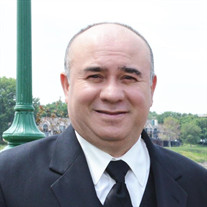 Ruben Guerrero, 56, of Sioux City IA, passed suddenly on April 11, 2021. A visitation will be held from 5:00-7:00 p.m., Friday, April 16, 2021 at Christy-Smith Funeral Homes, Larkin Chapel, 2320 Outer Drive North, Sioux City, Iowa 51104 with a prayer service at 7:00 p.m. with Father Mauro Sánchez of the Cathedral of The Epiphany officiating. He will be buried in his hometown of San Francisco Del Rincon, Mexico. Ruben was born in San Francisco Del Rincon, GTO, Mexico to Antonia Rios-Guerrero and Juan Guerrero-Muńoz, Ruben was a hard-working boy that lived on the ranch. Ruben was fiercely passionate about ensuring his family was taken care of and dedicated his life to his family. He paved the way for his family to come to the United States. He was the first to migrate to the U.S. He then helped 4 of 10 siblings and his parents migrate to the United States in the 1980’s. After migrating to the U.S., Ruben became a citizen and lived in Illinois for a short while. He then moved to Sioux City where he purchased a home and raised 4 daughters. He worked for John Morell & Co. in Sioux City approx. 30 years. Ruben was a strong, kind, loving, and supportive father. He always wanted his daughters to achieve a better life than he. His knowledge and guidance were the foundation of his family. His children went on to pursue careers in Nursing, Law Enforcement, and Cosmetology. He helped take care of his family in Mexico as well. He did so by sending clothing, personal items, and money back to his hometown. Ruben helped renovate his family’s farm and even purchased a new tractor to help make things better for them. Ruben was also a passionate runner, a farmer, friendly to all, and was always willing to talk with people. He completed additional schooling at WITCC for learning English as his secondary language. He was a member of Cathedral of The Epiphany Catholic Church. Ruben leaves behind his grandfather, Martin Rios; mother, Antonia Rios Guerrero; father, Juan Guerrero; his siblings, Maria del Refugio, Cristina, Moises, Eduardo, Maria, Juana, Carina, Manuel, Pablo Guerrero Rios; daughters, Antonia Rarrat, Abigail, Jessica, and Isabella Guerrero; grandchildren, Aria Howard, Carter and Mia Rarrat.

The family of Ruben Guerrero created this Life Tributes page to make it easy to share your memories.

Send flowers to the Guerrero family.