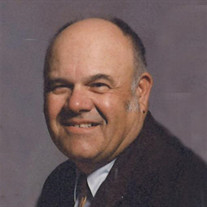 Ronald L. Trudo, 84, died Tuesday, June 4, 2019, at his residence in Jefferson, SD. A visitation will be 5:00 pm to 7:00 pm Monday, June 10, 2019, at St. Peter’s Catholic Church in Jefferson with a rosary service at 7:00 pm. A memorial mass will be 10:30 am Tuesday, June 11, 2019, at St. Peter’s. Ronald Louis Trudo, the son of Clifford and Celia (Chartier) Trudo was born April 11, 1935, in Sioux City, IA. He attended high school in Elk Point. On May 26, 1962, Ronald was united in marriage with Ann Benton at St. Michael Catholic Church in South Sioux City, NE. He was a heavy equipment operator and he worked for Western Contracting and the city of Sioux City. He also worked for Klinger Construction, Ebasco Construction and also for Clear Creek Logging in Sitka, Alaska Ronald later went into the gravel business for himself. He retired in 1995, due to health issues. Ronald was currently a member of St. Peter’s Catholic Church. He was also a lifetime member of the NRA, the Operating Engineers Local 234, and a lifelong member of the Catholic faith. Ronald enjoyed hunting, fishing, and trapping. He was a very talented woodworker and carver and an avid gardener. Ronald is survived by his wife, Ann of Jefferson; his children, Mike (Yvonne) Trudo of Sioux City, Joan (Lyle) Steckelberg of Jefferson, Mary Ellen (Ricci) Nelson of Sioux City; 14 grandchildren; two great-grandchildren; a sister, Virginia Quam of Elk Point, SD; and many other relatives and friends. He was preceded in death by his parents; an infant daughter, JoAnn; and brothers, Wilfred, Leonard, and Norman. In lieu of flowers, the family requests that memorials be given for Masses.

The family of Ronald Trudo created this Life Tributes page to make it easy to share your memories.

Send flowers to the Trudo family.