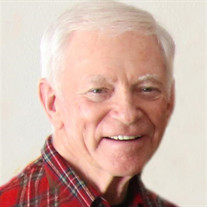 Ronald G. "Ron" Cooper, 70, of Sergeant Bluff, passed away unexpectedly Tuesday, Aug. 7, 2018. Services will be 10 a.m. Saturday at Cathedral of the Epiphany in Sioux City. Graveside services will be at 3 p.m. Saturday in St. Mary's Cemetery, Mapleton, Iowa. Visitation will be 4 to 7 p.m. Friday, with a rosary at 6:45 p.m. and a prayer service at 7 p.m., at Morningside Chapel, Christy-Smith Funeral Homes. Ronald Gene "Ron" Cooper, the son of Elmer and Miriam (Welte) Cooper, was born on July 29, 1948, in Sioux City. He graduated from high school in Mapleton in 1966. Ron went on to attend college before enlisting in the U.S. Army. After his honorable discharge, he worked for Toy National Bank. On May 19, 1972, Ron was united in marriage with Jeanette Harrison at Cathedral of the Epiphany. Ron was employed with I.B.P. (now Tyson Foods) as a credit manager for 30 years. After his retirement in 2008, Ron went to work driving a school bus in Sergeant Bluff. Ron was a very active member of Cathedral. He enjoyed canoeing, fishing, hiking, and traveling. However, Ron's greatest love was spending time with his grandchildren. Ron is survived by his wife, Jeanette of Sergeant Bluff; children, Scott (Jennifer) Cooper of Olathe, Kan., Brent (Carla) Cooper of Olathe, and Stacey (Wade) Larson of Vermillion, S.D.; nine grandchildren; two great-grandchildren; siblings, Dan (Marlene) Cooper of Mapleton, Tom (Diane) Cooper of Battle Creek, Iowa, and Patricia Cooper of Mapleton; and many other relatives and friends. He was preceded in death by his parents.

Ronald G. "Ron" Cooper, 70, of Sergeant Bluff, passed away unexpectedly Tuesday, Aug. 7, 2018. Services will be 10 a.m. Saturday at Cathedral of the Epiphany in Sioux City. Graveside services will be at 3 p.m. Saturday in St. Mary's... View Obituary & Service Information

The family of Ronald Gene "Ron" Cooper created this Life Tributes page to make it easy to share your memories.

Send flowers to the Cooper family.