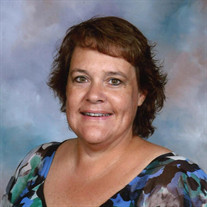 Robin Renae Ashley, age 53, of Sioux City died Sunday June 7, 2020 at her residence surrounded by her loving family under the care of Hospice of Siouxland. She fought a courageous battle of Crohn’s disease. Funeral services will be held at 10:30am Friday June 12, 2020 at Christy Smith Morningside Chapel with Pastor BJ Van Kalsbeek officiating with burial following in Graceland Park Cemetery. Visitation will held on Thursday from 5:00-8:00pm at the funeral home. Social distancing practices must be followed at the visitation and services. Robin was born on May 8, 1967, in Springfield, Oregon, the daughter of Benton and Juanita (Maranell) Wells. Robin attended and graduated from Paulina Community Schools with the class of 1985. She then moved to Sioux City to attend Morningside College where she graduated with a BA Degree in Education and then continued her education at Morningside and receiving her Masters Degree. While attending college Robin worked at a local bank, and at the local post office. Robin became a teacher for the Sioux City Community Schools upon graduation from college. She began her career as a teacher at Leeds Elementary School, where she was honored with her Green Apple Award. She then transferred to Washington Elementary. Lastly, she taught at East Middle where she taught Ancient World History until her illness forced her early retirement. She was a member of Sunnybrook Community Church where she participated in many study groups. Robin loved to travel, enjoyed fishing, bowling and taking pictures. She enjoyed life to it’s fullest. Robin is survived by her mother Juanita Ehret and her husband Wayne, her father Benton Wells, her loving sisters: Traci Keoppel, Shawna Sonksen, and Rhena Wells, her half sister Emly Arends and half brother Jesse Wells. She is also survived by step brothers: Larry Ehret, Darrin Ehret, Joe Goebel, and Keith Wells, and step sister Sandy Weldon, her nieces Averie, Skylar, Kailee, and Raegan, and nephew Noah, as well as many relatives, friends, and the many students whose lives were enriched by knowing her.

Robin Renae Ashley, age 53, of Sioux City died Sunday June 7, 2020 at her residence surrounded by her loving family under the care of Hospice of Siouxland. She fought a courageous battle of Crohn&#8217;s disease. Funeral services will... View Obituary & Service Information

The family of Robin Renae Ashley created this Life Tributes page to make it easy to share your memories.

Send flowers to the Ashley family.