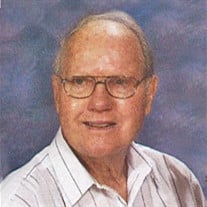 Robert M. Millarke, 94, Sioux City died March 19, 2019, at a local hospital. Funeral services will be 10:30 AM on Monday, March 25 at Immaculate Conception Church of the Mater Dei Parish (located at 1212 Morningside Ave) with Father Andrew Galles officiating. Visitation will be one hour prior to the service at the church. Burial will follow at Memorial Park Cemetery. Online condolences may be made to the family at www.christysmith.com. Robert Miles Millarke was born in Omaha, Nebraska, on January 5, 1925, the son of Fred and Faye (Simpson) Millarke. He moved to Sioux City at an early age and received his education at Immaculate Conception, East Junior High, and East High Schools. He was an aviation mechanic for the Air Force at the Sioux City and Long Beach California Airbases before enlisting in the Iowa Air National Guard. He retired from Sioux City 185th unit with over 31 years of service. He was a veteran of the Korean and Vietnam wars. He was united in marriage to Lavonne Cox on August 31, 1946, at the Cathedral of the Epiphany of Sioux City. They were the parents of a son, Tim, who passed away October 9, 2000. He enjoyed music, dancing and was an avid gardener. As a youth, he was a member of the Boy Scout Troop 32 Drum and Bugle Corps, and a member of the East High School band during his high school years. The couple were long-time campers and wintered in Texas for many years after retirement. He was a 66-year member of Immaculate Conception Church, NARFE, Geo. Nelson American Legion Post, RATS, Fraternal Order of Eagles and Boys of ’68. Survivors include a granddaughter, Rebecca (Alex) Vetos of Kemmerer, Wyoming; three great grandchildren: Lilly, Holly and Gavin; three sisters-in-law, Norma Coon of Sioux City, Marcia (Dick) Pruehs of Sioux City, and Judy (Dean) Specht of Yankton, South Dakota; and many nieces and nephews. He was preceded in death by his parents; his wife, Lavonne; his son, Tim; sister-in-law, Virginia Steinhoff; and a brother-in-law, Cecil Coon. In lieu of flowers, the family requests memorials in Robert’s name to Hospice of Siouxland.

The family of Robert M. Millarke created this Life Tributes page to make it easy to share your memories.

Send flowers to the Millarke family.