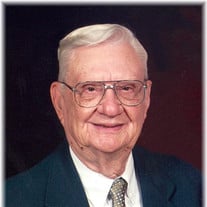 Robert Frank Jorgensen, 97, of Louisville, Kentucky, passed away on Sunday, February 24, 2019. Visitation will be from 10:00 am until the time of the Mass at 11:00 am on Thursday, February 28, 2019 at St. Patrick Catholic Church, (1000 North Beckley Station Road, Louisville, KY 40245). Graveside services will be held on Tuesday, March 5, 2019 at 1:00pm at Calvary Cemetery (2802 Casselman Street Sioux City, IA 51103). Bob was born on April 13, 1921 in Anthon, Iowa to the late Frank and Clara (Holusworth) Jorgensen. He is also preceded in death by his son, Jim Jorgensen, sisters Margaret Schort, Marilyn Boden, brothers Dale Jorgensen, Charles Jorgensen and Dick Jorgensen. Bob served our country during WWII in the U.S. Army as a Army Combat Engineer from 1942-1945. He was a 60 year member of The American Legion. He worked 45 years at the Stockyards buying and selling cattle in Sioux City. In retirement he enjoyed traveling and spending time with his children and grandchildren. He is survived by his loving wife of 70 years and in Bob's words "I married the most beautiful Irish girl in Sioux City", Mary A. Jorgensen, daughter Helen Maxedon (Richard) of Louisville, KY, son Mark Jorgensen (Cathy) of Loveland, CO, daughter-in-law Kay Arp of Troy Mills, IA, grandchildren Jason, Julie, Elizabeth, Christina, Robert and Tim. He is also survived by eight great-grandchildren. In lieu of flowers the family requests that contributions in Bob’s memory be made to The American Cancer Society and The American Heart Association.

The family of Robert Frank "Bob" Jorgensen created this Life Tributes page to make it easy to share your memories.

Send flowers to the Jorgensen family.