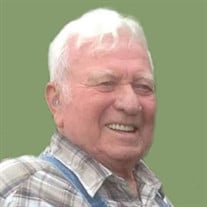 Robert C. Heineman, 94, died Friday, May 15, 2020, at his residence in Sioux City, IA. A private family funeral will be held at Christy-Smith Funeral Homes, Morningside Chapel, 1801 Morningside Ave., with burial to follow in Memorial Park Cemetery. Robert Charles Heineman, the son of Robert and Evalyn (Adams) Heineman was born August 4, 1925, in Blencoe, IA. He graduated from high school in Blencoe in 1943. Robert then enlisted in the U.S. Navy, and served as a radio operator on a troop transport during World War II. In March of 1947, Robert was united in marriage with Alice Myers. After his honorable discharge in 1951, Robert joined the Naval Reserves, only to be called to serve his country again during the Korean Conflict. There he served as a radio operator on a destroyer. Robert returned to Sioux City and worked as a salesman and tire man at Kemp tires. He remained there for 42 years, retiring at the age of 62. Then Robert began driving the School Lunch truck, which he did until retiring again at the age of 76. Alice died February 1, 2000. Robert moved to Onawa, IA, and lived there for the next 19 years. Robert was a member of the American Legion Post 64, and the Onawa American Legion. He would get together with his fellow members in Onawa for coffee, and frequently visit the Veteran’s Museum. Robert also loved tending his garden, and taught others how to perfect their growing skills. He greatly enjoyed watching and feeding birds. Robert is survived by his children, Pat (Rog) Fischer of Sioux City, Larry (JoAnn) Heineman of Murphy, NC, Barb (Blaine) Bickford of Milwaukie, OR, Roberta (Nick) Kathrein of Scappoose, OR, Steve (Patty) Heineman of Harrisburg, AR, Janet (Toby) Fairbairn of Amsterdam, MO, Chuck Heineman of Little Rock, AR; numerous grandchildren, great-grandchildren, and great-great-grandchildren; siblings, Paul (Karon) Heineman of Sherwood, OR, Alberta Karll of Canton, MI; and many other relatives and friends. He was preceded in death by his parents; wife; and five siblings. The family has requested that memorials be directed to the Veteran’s Museum in Onawa.

The family of Robert Charles Heineman created this Life Tributes page to make it easy to share your memories.

Send flowers to the Heineman family.