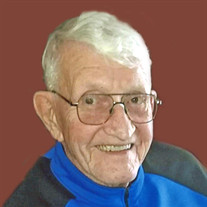 Robert "Bob' Burton Draisey, 90, of Sioux City, passed away peacefully Wednesday, July 10, 2019, at Holy Spirit Retirement Home surrounded by his family. A celebration of life service will be 4 p.m. Saturday at Larkin Chapel, Christy-Smith Funeral Homes, with the Rev. John Jensen officiating. Burial will be at a later date. Visitation with the family will be 3 p.m. until service time Saturday at the funeral home. In honor of Bob's love for Duke basketball, the family encourages everyone to wear Duke apparel or the color blue. Bob was born in Clark, S.D., om Feb. 4, 1929, the son of George and Carroll (Mills) Draisey. His early childhood was spent in Mitchell, S.D. At age 13, the family moved to Sioux City. Bob was a transporter in the radiology department of Methodist Hospital in Sioux City, which later became St. Luke's Regional Medical Center. It was there that he met his wife, Elizabeth Jensen, who was a nurse. They were married on Nov. 25, 1962 at Hope Lutheran Church in Everly, Iowa. They had two children, Scott and Amy and were married for 56 years. Bob enjoyed his work in radiology, joking with other employees, physicians, patients and their families. He has a good time while putting others at ease. He worked there for 39 years, retiring in 1991. Bob loved eating out daily for breakfast with his usual basted eggs, hash browns, toast and three grade jellies, and coffee. His favorite breakfast spots over the years included Hy-Vee, Johnnie Mars, 4th Street Cafe and the Glass Palace. Other passions were listening to classic country music, detailing his vehicles, watching Duke basketball and college football. he enjoyed camping and spending time at the family cabin in Spirit Lake, Iowa. Best of all, though. was the time he spent with his wife, children, grandchildren, great-grandchildren and granddog, Milo. He is survived by his wife, Elizabeth "Liz"; his beloved daughter, Amy (Mark) Augustine; five grandchildren, Sara Stodden, Steven Draisey, Kayla Augustine (fiance, Jared Meis), Tycen Augustine, and Brogen Augustine; great-grandsons, Watson and Noah Meis; sisters, Caron (Larry) Dalton and Darlene Caldwell; brothers-in-law, Ron Bandza, John (Pat) Jensen, and Carl (Carol) Jensen; sister-in-law, Margaret Jensen; and many nieces and nephews. He was preceded in death by his parents; brothers, Ken and Harold; sister, Marilyn Bandza; and his son, Scott Draisey. Bob, we love you.

The family of Robert "Bob" Burton Draisey created this Life Tributes page to make it easy to share your memories.

Send flowers to the Draisey family.