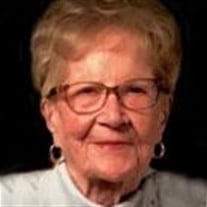 Rita M. Brassfield, 95, of Sergeant Bluff, Iowa, died Friday, February 14, 2020, at Pioneer Valley Living and Rehabilitation in Sergeant Bluff, Iowa. Funeral Mass services will be held at 10:30 a.m., Thursday February 20th at St. Joseph Catholic Church in Salix, Iowa, with Rev. Michael Erpelding officiating. Burial will follow at the St. Joseph Cemetery in Salix, Iowa, services are under the direction of Christy-Smith Funeral Homes, Morningside Chapel. Visitation will be from 9:00 - 10:00 AM, a Rosary will begin at 10:00 AM on Thursday February 20th at the church. Online condolences may be made to the family at www.christysmith.com Rita Mae Brassfield, the daughter of James and Elizabeth (Duffy) O’Meara, was born December 16, 1924, 100 percent Irish! She grew up on the family farm outside of Salix and graduated from St. Joseph Catholic School in Salix with the class of 1942. Immediately following graduation, she attended National Business Training School in Sioux City. She began her work career at Wincharger doing clerical work for the drafting department, then moved to Toy National Bank followed by employment at Socony Vacuum Oil Company in 1945. On August 7, 1946, Rita married Ernest “Bud” Brassfield at St. Joseph’s Catholic Church in Salix, Iowa. Together they had four daughters. She was a stay-at-home Mom with each child until school aged then returned to work at the Woodbury County ASCS office retiring in 1987. Rita loved her family and always made them feel special by doing small things with great love. She loved to play cards, garden, shop, and have coffee with family and friends. She was organized with everything in its place, known for her homemade candies and cinnamon rolls and saving obituaries of her friends and family so as to remember them every year. She was a member of the Legion of Mary Legionaries at St Joseph Catholic Church, a world- wide organization of the lay apostolate dedicated to prayer and service. Her example of self- sacrificial love, faith, perseverance, strong work ethic, devotion to family and friends is her legacy and one her family hopes to continue. Survivors include four daughters, Jeanne (Jack) Basye of Scottsdale, AZ; Mary (Larry) Johnson of Sloan, IA; Debbie Miller of Omaha, NE; and Lori (Doug) Stone of Boise, ID.; seven grandchildren, Matt (Kristin) Johnson, Adam Johnson; Wyatt and Riley Miller; Hunter, Delaney and Collin Stone; two great grandsons, Charlie and Beau Johnson; three step-grandchildren, five step-great-grandchildren; and Linda Nordstrom (adopted daughter) of Sloan. She was preceded in death by her husband; parents; and brothers, Everett and Arthur O’Meara. Pallbearers will be her grandchildren: Matt and Adam Johnson; Hunter, Delaney and Collin Stone; Wyatt and Riley Miller.

The family of Rita M. Brassfield created this Life Tributes page to make it easy to share your memories.

Send flowers to the Brassfield family.