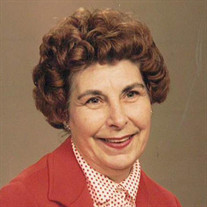 Rita Angela (Reding) Albracht, age 95, of Sioux City passed peacefully January 20th, 2021 at Northern Hills Assisted Living with family and the great staff. Her family was able to visit with her on a video meeting from around the world right before her passing. She was born in Defiance, Iowa to Augustine & Francis Reding. During World War II she was a “Rosy Riveter, after which she met her husband Theodore (Ted) Albracht in Omaha when he sold her a pair of shoes and became smitten with her, they were married for 59 years before his passing in 2008. They moved from Omaha to Sioux City in 1952. Her priority was always her family and they raised five children with unconditional love. She was a great cook and seamstress along with a fabulous bridge player even into her last years. She was a dedicated member of Blessed Sacrament Catholic Church for 69 years and was a member of Catholic Daughters and was always active in her church circle. Rita is survived by her five children, Randy and his wife Dianna of Lancaster, PA, Allen Albracht of San Diego, CA, Terry and his wife Jackie of Everett, WA, Tom and his wife Connie of Hong Kong, Ann and her husband Tim Gerch of Lincoln, NE; one brother Germain Reding of Bennington, NE; sister-in-law, Yvonne Albracht of Omaha, NE; brother-in-law, Bud Albracht of Humphrey, NE; brother-in-law Bill and Marge Albracht of Humphrey, NE; sister-in-law, Babe Kraus of Lakeland, FL; 12 grandchildren with three weddings pending until they can celebrate with family, Ben Albracht & Amy Morgan (engaged) of San Luis Obispo, CA, Dan & Rachel Albracht of Dawson, Utah, Lauren & Chris Franco of Dallas, TX, Matt & Kathryn Albracht of Philadelphia, PA, Lancia Albracht of Lancaster, PA, Adam Albracht & Lindsey Kehrer (engaged) of Port Orchard, WA, Garrett Albracht of Everett, WA, Holly Albracht of Perth, Australia, Ryan Albracht of Perth, Australia, Ted Albracht II of Perth, Australia, Alex Gerch & Bailey Pons (engaged) of Lincoln, NE, Riley Gerch of Lincoln, NE; as well as many loving nieces and nephews and great friends. Preceded in death by her husband Ted; her parents; brother, Irmin Reding; and sister, Coletta Duke. Due to travel restrictions with her family being located in so many distant places the family will have services and a celebration of life as soon as everyone can gather together in Sioux City. Arrangements are being made by Christy-Smith Funeral Home Sioux City with an online guest book if you would like to leave your message to the family. The family will have a service when we are able to gather to celebrate her life. In lieu of flowers contributions can be made to Blessed Sacrament Catholic Church or Hospice of Siouxland. We want to thank the wonderful staff at Heritage Northern Hills independent and assisted living where mom lived for the past 10 years. They took care of all of her needs and had particular loving care from Rhonda, Megan and Adam. Also, the family wants to thank Mike Keating, Mary Motz, Denny and Joanie McWilliams, Chuck Hanson and Dave Stedma, Rita Potter for all of their kind acts that enabled our family to know Rita was in good hands with the distance between us and Sioux City.

Rita Angela (Reding) Albracht, age 95, of Sioux City passed peacefully January 20th, 2021 at Northern Hills Assisted Living with family and the great staff. Her family was able to visit with her on a video meeting from around the world... View Obituary & Service Information

The family of Rita Angela Albracht created this Life Tributes page to make it easy to share your memories.

Send flowers to the Albracht family.